Los Angeles, CA -- (SBWIRE) -- 04/03/2015 -- "Memory Lane", a no-budget science-fiction thriller discovered on YouTube, has been given a national release. It is available now On Demand with more than 300 cable providers in 30 million homes. It is also available on DVD at national retailers including Best Buy, Barnes & Noble, and FYE.

"Memory Lane" tells the story about a young war veteran who travels between our world and the afterlife in search of his fiance's killer by stopping and restarting his own heart. The brilliant science-fiction thriller has been compared to independent classics "Pi", "Memento", and "Primer".

First-time filmmaker Shawn Holmes shot "Memory Lane" in his hometown in Ohio using a digital camera and editing on his laptop computer. "We tried to raise money and failed. So I just shot it anyway," said Holmes. "I've been making short films since I was eight, and those never cost anything. I just made 'Memory Lane' the way I've always made films. The money was spent feeding my actors, who all volunteered. I also bought a six dollar bottle of fake blood. I didn't have to pay for a crew because I was the only person on the crew."

Upon finishing "Memory Lane", Holmes was invited to screen it at the West Virginia Filmmaker's Festival. After the screening Holmes became the youngest nominee in history for the West Virginia Filmmaker of the Year Award. "I didn't have a marketing budget," said Holmes. "And I wasn't quite sure what to do with it after I'd seen how positively it was received by an audience. So I did something that would seem counterintuitive and gave it away for free." Holmes released "Memory Lane" on YouTube for a single weekend where it received more than 22,000 views in less than 48 hours. This attracted the attention of Helen Grace. Grace's company, Monster Pictures ("The Human Centipede"), licensed "Memory Lane" and released it in the UK, Ireland, Australia, and New Zealand.

"Memory Lane" went on to world-premiere at Sci-Fi London. It then screened at some of the largest film festivals in the world including Cannes in France where Hollywood began eyeing Holmes and his no-budget sci-fi thriller.

"Memory Lane" was released nationally in the US and Canada on Tuesday March 24th, 2015 through WildEye Releasing.

"I never expected it to get this big," said Holmes. "I was just trying to prove to myself that I could tell a great story."

SYNOPSIS
When PTSD-plagued war vet Nick returns home and finds that his finance Kayla has committed suicide, he decides to take his own life, but what he sees in flashbacks moments before he is resuscitated leads him to believe Kayla was murdered. Now Nick must travel back and forth between our world and the afterlife in a search of her killer - but to do it, he will need to die over and over again.

About Shawn Holmes
Hailing from Martins Ferry, Ohio, Shawn Holmes is an indie filmmaker who has become the youngest nominee in history for the West Virginia Filmmaker of the Year Award. His debut movie "Memory Lane", which he created while just using a digital camera and a laptop has been given a national release. 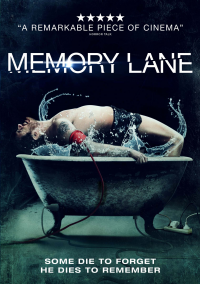