A young lesbian couple fleeing terrifying persecution from an African country miraculously made their way to San Francisco where they are seeking asylum and will soon realize their dream to marry.

Mari and Cara fell in love over seven years ago. Their outing, first amongst family members, turned into many years of persecution.

After their parents found out they were in a lesbian relationship, they were kicked out of their homes. Mari's mother invited them back and they thought her invitation was conciliatory. However that night after eating a dinner cooked especially for them, they both became violently ill. The food had been poisoned. They survived and fled to another part of Angola. Because of their appearance and perceptions by community they suffered extreme harassment and became targets, wherever they stayed.

Mari could not walk on the street without threats and derogatory comments. After renting a new apartment and starting a small business, their circumstances soon became a matter of life and death.

Neighbors would cut off the electricity and water supply and each time it was repaired it would happen again and again. Groups of people would appear intermittently outside their door shouting slogans and threats and preventing them from leaving the house. Their food began to run out and they had to take risks to go on the streets in a nearby area to sell belongings to survive. Their dog was poisoned, epithets were written on their walls, their business equipment was stolen and destroyed and they were told "we are going to rape and burn you." Survival became impossible.

The executive director of African Human Rights Coalition, Melanie Nathan explained: "Their arrival in San Francisco, while life saving, is fraught with daunting challenges, and so Mari and Cara desperately need community support.

Our LGBTI brothers and sisters are persecuted in 34 African countries, mostly because of old Colonial Penal Codes, ramped up anti-homosexuality laws, and provocation by Western fundamentalist religious extremists.

There are very little mechanisms in place to help people into exile. There was virtually no help for Mari and Cara; and now very little in the way of resources to resettle here in the Bay Area. They are not allowed to legally work until six months after the filing of their asylum application."

Mari and Cara, both talented musicians, are currently being housed in rural West Marin, thanks to the generosity of 2 families. The accommodation will soon expire and the location is not ideal. They are looking for a room in the East Bay or City. We have set up a crowd source fundraiser to help them start their new life. They are unable to work legally until 6 months from the date of filing their asylum applications.

While the internationally renowned Cooley Law firm is providing pro bono legal representation to both Mari and Cara, in their quest for asylum, there are no humanitarian resources, nor any funding to support LGBTI asylum seekers in San Francisco.

An Indiegogo fund has been started to help the couple at http://bit.ly/1F67tyV

About The African Human Rights Coalition
African HRC provides case management, strategies, resources and humanitarian assistance to members of the LGBTI community in several African countries who are forced into hiding, or exile, including asylum seekers and refugees, as a result of anti-LGBTI laws or persecution. The ultimate goal is to help LGBTI people from Africa pursue freedom of sexuality, self-empowerment, and economic stability, whether in Africa or abroad, as the case may be. (http://www.AfricanHRC.org) 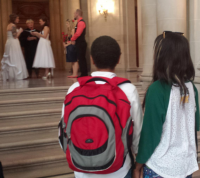 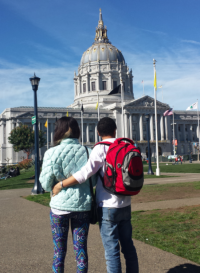