Duncanson's Short Film Is a Powerful Allegory of Life's Battles

Brooklyn, NY -- (SBWIRE) -- 05/20/2015 -- The Tiger & The Guru, a short film by Brooklyn resident Peter Duncanson, explores a whole lot more than the trials and tribulations of a four-legged creature.

"It's about fear and love," explains Duncanson. "If you've ever been terrified or in love, if you've ever regretted something in your past or looked to the future and been inspired by the possibilities, then this film will touch your soul."

A former high school science teacher, Duncanson draws much of the film's symbolism from his years of observing students.

On the surface, the movie focuses on a tiger that grows up in captivity and then struggles to survive once it is set free. "The Tiger & The Guru is a deeply powerful allegory of life's battles," says Duncanson. "This is an allegory about the battles we face inside our minds and in the physical world. It is about the struggle to overcome the tangible and intangible obstacles that stop us from becoming who we are.

"It's a beautiful story. It's endearing, it's funny, it's raw, it's terrifying, visceral and eminently captivating."

The film has a little bit of everything: martial arts choreography, romance and even some scary moments. "Two early indicators that a film will be successful are the script and the team," Duncanson says. "We have an all-star cast and crew, all of whom are excited about this project. The script been reviewed by at least 10 working filmmakers and the feedback has been overwhelmingly positive."

The cost, for even a short film, is considerable. Duncanson estimates that he'll need $15,000 to complete The Tiger & The Guru. This funding will cover camera rental, lights, cast and crew salaries, insurance, costumes, makeup, technical assistance and festival submissions.

In order to generate this capital, Duncanson has launched a Kickstarter campaign, which can be viewed at www.kickstarter.com/projects/1012579835/the-tiger-and-the-guru

Donations of any amount are welcome. For a contribution of $15, backers will receive a download of the film's final cut. A $50 pledge is good for the film download plus an invitation to a private screening in New York City.

For $100, you can get all of the above a limited edition coffee table booklet with art and photo stills from the set and interviews with the cast and crew.

"It's not just my story, it's your story, too," Duncanson says. "And I can't make this film without you."

Duncanson can be reached directly at phduncanson@gmail.com 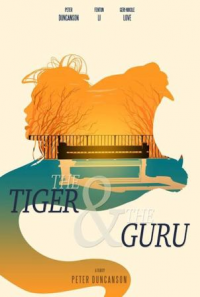