Los Angeles, CA -- (SBWIRE) -- 05/20/2015 -- People don't buy physical albums or CDs as much as they used to. That's because digital files are so much easier and cheaper to carry and play with, and also, bulky CDs are considered to be uncool in this day and age.

That's why the Los Angeles based Songwriter/Producer/ occasional rapper and DJ, Kash Rockit is pleased to bring her creative idea to the music industry, which no one else has thought of before – she is releasing her  new Hip Hip Albums  in a custom made USB drive – designed as her alter superhero ego in 3D cartoon character, Kash Rockit mini-me.

"Everybody goes through something at some point of their lives…"

Kash Rockit says, "Everybody needs an inner superhero in everyday life. I've gone through a school of hard knocks – getting over childhood trauma, depression, struggling as an independent musician, had to learn to find inner strength, learn to get self motivated, the KR character is what I envisioned as my inner hero."

Kash hopes to connect with like-minded audiences, and spread positive vibes with her new Hip Hop releases . She wishes to provide some solace to people through her newest hip hop songs, particularly at a time of general economic hardship all over the world.

Kash Rockit talks about what she aims to do with her music: "I wanted to make the experience of music consumption entertaining and give you a fun conversation piece that turns strangers into friends."

Kash Rockit has not only rapped, sung her first single "Dragon" off her EP "Power Dragon Head", but also written and produced it. She didn't start off as a singer, and had a hard time finding a singer to sing the hook for "Dragon", with five singers flaking out, Kash practiced singing for two months. And guess what, she sang the hook herself. The song is about never giving up on finding yourself no matter what….

Kash will be giving away the track for free on her website at http://kashrockitmusic.com/newhiphopalbums . "It's not about the money", said Kash. "It's a song I'm really proud of and I'm pleased to share the music and inspiration with the world, and spread the positive energy. Also, I'm excited to showcase my fun cartoon character on a USB and iPhone case".

Positive Hip hop – EDM fans can sign up for Kash's free mailing list at http://kashrockitmusic.com/ and get a free copy of songwriter/producer Kash Rockit's single from her new Hip Hop albums and bag special offers. But remember, the free download will be up for a limited time only.

About Kash Rockit
Kash Rockit is a refreshing Songwriter/Producer/ occasional rapper and DJ. Her music is set to be featured in Major Lazer (TV series) in June, created by the famous DJ and record producer Diplo. Kash's ready to write, produce more music for Film/TV and other artists. More good news are to come soon… 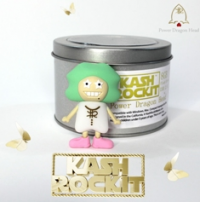