GetSolarPrices.com Explains the Reason Why the World Deserves Clean Energy from Solar Panels

The move to make an act now with regards to empowering the use of solar panels in generating electricity came from the fact that oil deposits are not renewable that some time later it will dry up; which is why nations around the world have to do something to preserve what is left and utilized what has been readily available and renewable.

Norwich, England -- (SBWIRE) -- 05/25/2015 -- In the coming years, the world will no longer depend on fossil fuels because people have found a new way to generate clean energy that does not disrupt the balance of nature. And through photovoltaic modules which are popularly known as solar panels, energy bills will never be a burden anymore to the pockets of every individual because they will have the chance to generate electricity for their own use. And with the solar panel cost plummeting in the market and increase in number of people installing panels in their roof and backyard, it cannot be denied that today's solar panels can indeed power the world.

In the recent interdisciplinary study conducted by MIT energy, the solar panels of today has the possibility to supply the world with 2050 terawatts of clean energy coming from the sun. Each terawatt is equivalent to 1,000,000 megawatts. However, this will only be possible if there's a political will that will encourage the public to wean off from fossil fuel use and switch to solar panels. According to MIT researchers, the crystalline silicon photovoltaic technology will be the key player in harnessing the sun's energy in the future. Yet, no matter how complete the needed materials are in improving the efficiency of the solar panel use today; without proper funding, financial incentives, and political muscle, this insufficiency could tear down the dream to have a clean energy that would satisfy the modern lifestyle of people.

The move to make an act now with regards to empowering the use of solar panels in generating electricity came from the fact that oil deposits are not renewable that some time later it will dry up; which is why nations around the world have to do something to preserve what is left and utilized what has been readily available and renewable. With the funds received by fossil fuel companies from subsidies each year, it is best to divert the funds in strengthening the clean energy campaign so that the dream of having a carbon-free world will be achieved. Among the other technologies, solar panels are considered to be low-carbon energy that has a potential to grow in a very large scale. Yet, these will only be achievable if the money will be used in building the solar panel infrastructure. In addition to this, the possibility of having all the industries in the world to be powered by the sun's energy will take place if the consumers itself would think of building a smart grid where all of the solar energy will be integrated from the rooftop solar systems, utility-scale solar projects, community solar into a new single system.

Consequently, thinking what solar panels can do to change the landscape of wholesale and distributed power that fossil fuel companies are dominating today; it cannot be helped that people will look for an alternative where they could gain more benefits rather than expense. But as long as there are people still reluctant to the idea that the solar power is the long prayed answer in the energy crisis every nation experience, then it's definitely a long way before the solar energy will be utilized globally. 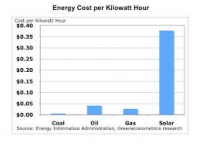