Solaroad Technologies Group have been developing battery-based solar products since 2005 and is now ready to make their products available to consumers to take on Tesla’s solar solutions.

Baltimore, MD -- (SBWIRE) -- 05/26/2015 -- Elon Musk is not afraid of competition. He famously released the patents to the Tesla car to encourage more players to enter the renewables market. Solaroad Technologies Group has been developing products for that market since 2005, and is now ready to bring the fight to Tesla as a provider of affordable and renewable solar energy products. Their most exciting such development is the GridKicker, which aims to follow one revolution with another, and help individuals become energy independent.

The GridKicker is a fully portable, collapsible solar generator with battery storage, which uses curved solar panels in a three dimensional array to maximize the generation capacity of the unit. The GridKicker can be easily carried around and features both AC and DC outlets, as well as PV generation and battery level monitoring.

The company started out as a Research and Development concern, and innovated the curved panel solar energy system, which has been implemented for use on motorway barrier walls, and cube tubes, the solar tubing can line any edging indoors or outdoors to offer an off-grid power source for technology.

With current developments including solar film to adhere to windows to further optimize power generation without taking up further space, and nanotechnologies to push the boundaries of power generation and storage, the company has the passion and the products to be Tesla's first major contender.

A spokesperson for Solaroad Technologies Group explained, "We are thrilled to be able to bring our products to market for the first time later this year, and we are excited to be putting the finishing touches to the GridKicker. This portable, high quality solar generator will prove invaluable not only to disaster relief organizations, but to anyone who works outdoors, or would rather work outdoors. It can free up laptops and mobile devices from dependence on conventional charging, and power most appliances with ease. These are exciting times for us, and for the world." 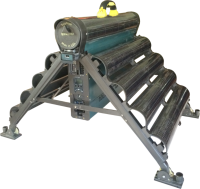