Montreal, QC -- (SBWIRE) -- 07/08/2015 -- Best-selling sports brand King Athletic announced today the restocking of its Amazon listing of the Resistance Band Set. The brand made the decision after a successful launch in April that led to the sold out of the sports equipment in less than a month.

The fast selling of the King Athletic Resistance Band Set is attributed to the quality of materials used for its creation as well as to the fact that it offers a complete workout no matter one's level of fitness and workout goals. It can be as useful and efficient to a pro athlete, a child and an elder individual that wants rehabilitation exercising after an injury.

King Athletic announces that the five-year product satisfaction warranty extends to the newly available Resistance Band Set and that the same applies for the 30-day money back guarantee.

The complete Resistance Band Set with five resistance tubes offers the total workout resistance of 69 lbs. The user can combine different resistance-level tubes for different exercises to enjoy the maximum of their workouts' strength and conditioning capacity.

Resistance Band workouts are ideal for people undergoing rehabilitation due to chronic conditions or recent injuries. They are also used by athletes and amateurs. The tubes offer versatility and variety in the amount of exercises one can perform by using a different combination of the nylon resistance tubes and by fastening it to different multitudes.

Consumers will find the Resistance Band Set by King Athletic on Amazon.com. The newly restocked listing features a 40% discount, saving buyers a total of $20 per purchase.

About King Athletic
King Athletic is a design oriented and innovation focused company, constantly seeking to help athletes of all skill levels reach their peak performance. King Athletic strives to be a leader in the sporting goods and accessories industry (specializing in Jump Ropes) with a brand built on a love and passion for sports and athleticism. 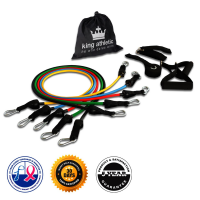