Stone Mountain, GA -- (SBWIRE) -- 07/20/2015 -- Actor "Henry Louis Adams" is compiling quite an impressive resume within the entertainment industry. He has played 3 characters for TV One's Hit Series Fatal Attraction. In 2013, he played "Derrick Yancey" in the episode "Shopping for Murder" which aired within the first season. In 2015, for Season 3, he played both "Jean Paul Devaugn" for the episode entitled "Dangerous Addiction" and "Terry Lee Camper" for the Episode entitled "Metered Murdered'.

Adams has appeared in Homicide Hunter for the ID network playing the character "Lincoln Wilson" in the episode entitled "Death Comes Knocking" and also Snapped Killer Couples on the Oxygen Network. It is safe to say that Adams is dominating the "True Crime" Entertainment Tv Field. He is also working on a television pilot called "Clairvoyance - The Ellis Files", in which he plays a police Lt. that is currently in post-production. 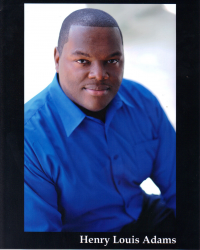