St. Louis, MO -- (SBWIRE) -- 07/21/2015 -- Sir William Of Yorkshire, the famous goat, known for his Missions, and his writer, PJ Gilbers, announced the first Sir William Art Contest for kids fourteen and under earlier this spring. They thought it would be a great way to encourage creative children to explore and stretch their imaginations. Never did they expect that the contest would spread around the world.

"We are receiving wonderful art from children ages six to twelve so far, from the United States, Pakistan, India, Bangladesh, and Sri Lanka. The subjects include everything from elephants with their squirrel pals, to pet sneakers. We are thrilled and impressed."

Sir William, a good friend to many children over the decades, has recorded several of his missions with the help of PJ Gilbers, including Goat. And the Terror Birds, Goat. And the Komodo Dragon, and Goat. And the Space Snake and the Meteor Named Bob Available at Amazon.

PJ comments that "William is dedicated to helping kids when they need it the most. Scott, for example, knows his little sister is trapped on Komodo Island and works with William to rescue her. The wonderful thing, I think, about William is his respect for the strength and wisdom of the children he meets. They are facing some of the toughest situations you can imagine, the loss of a parent, bullies, trying to survive in blended families, and more. His focus is never to just jump in, like a super hero, and make everything 'better.' He simply paves the way for them to discover their own unique abilities and power to tackle whatever life throws their way. He is out there, working with the kids, and I chronicle these adventures."

Sir William describes the reactions of kids when faced with a talking goat, "They are a bit stunned, but I simply tell them the truth, 'I am William, a goat. My father was a goat, as was his father before him. We come from a very long line of goat explorers, inventors, pilots, astronauts... I am a goat on a mission. But most importantly I am your friend.' Eventually they understand and we are comrades in arms, forever."

Last spring Sir William had his first Short Story Contest for Kids and was amazed at the wonderful and talented writers submitting original works. The winners are posted on his website, PJGilbers.com.

"The winner is a young writer, Sofia D. of California, who is just twelve years old and yet has the skills and spirit of a natural, phenomenal writer," PJ explains. "One of my favorite quotes from her story, Invisible, is about a girl wanting to be seen and liked, but not willing to risk it, thus trying to be invisible, "'Is there even a Lilian in this class?' [the teacher] says looking around, obviously not having heard my quiet here.' We are very excited about our next writer's contest in the fall."

The art contest deadline is Halloween, October 31, 2015. It is free with a $25 grand winner award. Three art works are permitted per child. Age groups are divided, from six years to nine, and ten to fourteen years.

About Goat on a Mission
Goat on a Mission, an adventure book series, is perfect for kids eight to fourteen, each one free standing adventure with Sir William. Teaching opportunities abound in dealing with bullies, blended families, disabilities, and learning geology, geometry, astronomy, space travel, zoology, cryptozoology, physics, and history. 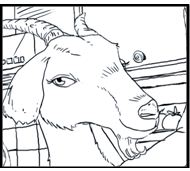