St. Paul, MN -- (SBWIRE) -- 09/20/2012 -- Foie Gras is a luxury food as ancient as the pharoes who stuffed themselves with the fattened livers of ducks and geese over a thousand years ago. While many still enjoy this gourmet treat, others are trying to take it off the market completely. Animal rights activists have had foie gras in their sights for years. At issue is the method producers use to fatten the ducks and geese which involves force feeding the watefowl with a metal tube. In July, activists won a major victory in California where a statewide ban prohibiting the sale of foie gras is now in effect.

Legal experts, even those sympathetic to the ban, have been critical of the legislation, whose interpretation apparently hinges on the feeding history of the ducks and geese in question. “The law is so vague and and was so poorly written that it will be impossible to enforce,” wrote Reason.com’s Baylen Linnekin. Recent reporting by Norimitsu Onishi of the The New York Times seems to confirm this: several restaurants have continued offering foie gras as a “complementary” addition to mysteriously overpriced menu options, effectively skirting the ban by (technically) giving foie gras away instead of selling it.

Some business owners have gone even further. An online gourmet food retailer, Food Fancy, has publicly denounced the ban and is offering a “Damn the Ban” discount of 10% off foie gras orders shipped to California. To gain more traction, they recently extended their discount to caviar as well. “We believe that animals are property,” said Food Fancy executive Chad Richards, “and property doesn’t have rights. Even if animals did have rights, maybe these activists should have concerned themselves with the 140,000 homeless people in California, or the 24% of Californians who don’t have medical insurance before they got all concerned over the feeding habits of waterfowl. I think the whole thing is ridiculous.”

Since the ban has only been in effect since July, it is impossible to tell how successful it will be, but if current trends are any indication, the claims of Linnekin and others seem accurate. Foie gras is still available in California from a variety of sources, and this seems unlikely to change unless the state cracks down in the near future.

About Food Fancy
Food Fancy provides gourmet foods (including caviar, foie gras, smoked salmon, truffles, and chocolate) to the United States from the most reputable providers across Europe and the world. For more information please visit: http://foodfancy.net 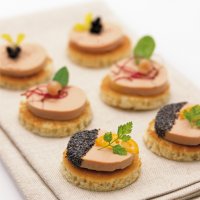