WAKEUP CALL TO HUMAN! If no one ever challenged the statuesque, the earth would still be flat.

Bajitpur, Bihar -- (SBWIRE) -- 02/15/2012 -- O’ Human! You are physically immortal. How to attain immortality, read the book ‘HUMAN IS IMMORTAL’ written for first time in the history of MANKIND declaring human to be immortal.

Although, physical immortality was attained by Indian yogis, more than 5000 years back but it was kept secret by yogis because of their ethics for long time. Now since it has been made public, all those methods of curing all diseases and attaining immortality by yogic means have been described in this book. Now, anybody who desires to be live long, become immortal can achieve it by do-it yourself yoga practices described in the book.

Human body is designed to be physically immortal (read the medical science section of the book). It is our fault that we don’t know about the design, function and operation of different parts, systems, organs, glands and tissues of our body. It is us who create diseases due to our own ignorance and negligence and die early. We must know ourselves.

The book ‘HUMAN IS IMMORTAL’ is the first book ever written with medical science and yogic science together side by side along with latest researches and evaluation of both on scientific basis. Medical science section describes the human physiology, different parts, systems, glands, organs and tissues with their functions; whereas yogic science describes methods and processes to keep human cells (all different kinds) alive and transform them into immortal cells by providing protein, supplying sufficient oxygen (called prana by yogis), and keeping human body free from toxins by performing pranayama and other yogic processes.

This book further describes the medical science requirements for human to be physically immortal and evaluates yogic science how this science meets the requirements of medical science providing immortality to human. People can have the knowledge of both sciences and their achievements so far, although yogic science had reached human immortality more than five thousand years back. This science was hidden for thousands of years because of ethics of yogis who wanted to keep this science limited to their own circle of yogis.

Diseases and old age are the single cause of early death of human. Curing diseases reversing aging and making human immortal is the world’s greatest challenge of 21st Century. How medical science has failed to meet these challenges so far, and how yogic science had been able to achieve all these by natural means providing human disease-free and free from old age since long , all methods and processes have been described in the book practicing which one can cure any and all diseases and reverse aging becoming young again. One must keep in mind that yogic science starts where medical science fails.

Four years back I had stroke; my left leg, hand, speech and memory was seriously affected. I could not pronounce simple words and could hardly walk. I was treated by several doctors in US. After two years of my treatment with prominent doctors, my blood pressure stayed between160-220; cholesterol level remained high after changing medication several times for both. Being frustrated I decided to practice yoga. First I reduced medication and practiced yoga. After six months I totally stopped medication and a year later I was disease-free and as healthy as I was 10 years back. I am 76 years old today without any disease and practicing yoga for attaining immortality. Millions in India and in other countries of the world are being benefited by curing diseases practicing yoga. Why not you? Yoga doesn’t cure diseases only; it provides insurance against all diseases to human body without any cost.

Dr. Alexi Carol, Nobel Prize winner kept chicken heart cells alive for 28 years, and later died due to negligence of his staff, all 10-100 trillion human cells can be transformed into immortal likewise. Researcher and Professor Kirkwood’s Soma Theory can also be fulfilled because cells will be generating enough energy to meet the requirements of wear & tear and metabolic functions of human body.

Read how the cell’s requirement of protein, oxygen (called Prana by yogis) and internal cleaning of body fluid have been met by yogis (same was done by Dr. Carol to keep chicken cells alive) and how energy generation and its distribution has been kept in balance by methods and processes designed by yogis (fulfilling Mr. Kirkwood’s requirement) .

Know, how lack of breathing (oxygen or prana) weakens our nervous system, creates diseases and how yogis have used breathing (called- life energy by yogis) designing pranayama and different yogic processes to cure diseases, cleaning human body from all toxins and rejuvenating and strengthening our nervous systems.

Yogis also designed processes to clean and rejuvenate our somatic and automatic nervous system (called Nadi system by them) including our most powerful brain, to prevent its shrinkage and deterioration which causes diseases, old age and early death. These processes renew our information system, brain power and consciousness. This further indicates that neurons can be regenerated and rejuvenated throughout human body at any age, although medical science is still confused.

All men, women and children can cure any and all diseases by practicing simple do-it-yourself yogic postures and pranayama as explained in the book. Yoga has a 90% success rate of cure of all diseases by natural means without medicine and side effects and it is also free of cost. Why don’t try?

Even incurable diseases like blood sugar, high blood pressure, high cholesterol, cancer, heart diseases, HIV, AIDS and Autism, are cured by yogic practices. We must know that HIV, AID and Autism are caused by immune deficiency, and the whole immune system is under attack, especially in case of HIV/AID. We should also know that there is scientific evidence that yoga stimulates the parasympathetic nervous system which releases neurotransmitter acetylcholine known to strengthen the immune system.

Read all this in the book with do-it-yourself methods to cure all diseases, reverse aging to become young and attain immortality by natural means. The book has been written by a Mech. Engineer yogi Dwarika Singh, BSc. BSc. (Eng.) who learnt yoga from world famous yogi, SWAMI RAMDEO. The book also includes writer’s own yogic experience of past and recent two years including his own scientific analysis on yoga. Writer’s aim is to educate at least one billion people worldwide, cure diseases and eradicate your ignorance. 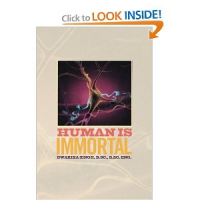