Gatlinburg, TN -- (SBWIRE) -- 09/26/2013 -- Ripley’s Haunted Adventure is celebrating its 15th annual Fright Nights show this year with “Experiment in Terror”. Ripley’s year-round haunted house will base their 2013 show on an insane asylum, but with a twist. “We’ll have your typical patients, orderlies, and doctors as characters, but we are taking it up a step this year” says Greg Weir, artistic manager of Ripley’s Haunted Adventure. “We want to go beyond the typical ‘boo scares’ and add an element of mental scares that put the guest through the ‘experiment in terror’. We really spent a lot of time coming up with scares that are out of the norm to what we’ve done in the past” stated Weir. There is no extra charge for the special Fright Nights shows which run every Friday, Saturday, and Sunday in October as well as Halloween night, November 1st and November 2nd. Shows begin nightly at 6:00pm and run until close.

Ripley’s Haunted Adventure is a year round haunted house that was opened in 1999 by Ripley Entertainment on the site of what was once the Grimsby & Streaper Casket Company. The old casket factory was abandoned under mysterious circumstances during the early 1900s shortly after residents started disappearing. Until Ripley’s can decide the most beneficial development for the area, they continue to conduct tours of the facility.

Ripley’s Haunted Adventure is one of the few haunted houses in the nation that is open 365 days a year. Single admission tickets are $13.99 + tax for ages 12 and up and $7.99 + tax for ages 6-11. No one under the age of 6 is allowed due to the graphic nature of the facility, and those under 12 must be accompanied by a guardian. 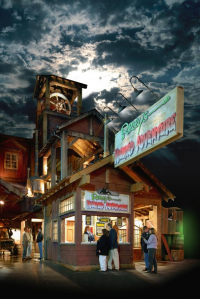