As a firm believer that crowdsourcing can disrupt Congress’ detrimental status quo, United States Air Force veteran, Dustin DeMoss, is sharing his manifesto for change in a powerful and compelling new book.

Sallisaw, OK -- (SBWIRE) -- 06/05/2013 -- While many have a mission to affect great political change, most bold and powerful books hit the marketplace either from noted celebrities, activists or even politicians themselves. However, one United States Air Force veteran is bucking the trend by presenting a manifesto for change that speaks on behalf of the millions of Americans that don’t have a nationally-televised voice.

‘Rise of Crowdsourced Politics’ seeks to upset the status quo of lobbyists and corporations inching their way into Congress' pockets.

Rise of Crowdsourced Politics looks at the increasing amount of crowdsourcing of legislation developing in Europe and how it can affect the United States.

As the author explains, he’s deeply invested in his cause.

“I’m fascinated with the way government and technology intersects. This compelled me to speak on behalf of millions of others without a global voice; to try and change the nature of politics in the United States,” says DeMoss.

Continuing, “It affects people who are concerned about the government and lobbyist and corporations having too much power. His book is presented in the format of a manifesto on my belief that crowdsourcing could upset the status quo. Argumentation for the use of Crowdsourcing in American politics today is given as a tool for public democracy.”

With its powerful contemporary expels of Crowdsourced politics and call for direct action within the United States, interested readers are urged to purchase their copies as soon as possible.

About the Author: Dustin DeMoss
As a veteran of the Air Force, Dustin DeMoss decided he'd like to change the nature of politics. First he became a 2nd district representative of the Oklahoma Democratic Veterans organization and then a young democrats representative for the veteran caucus.

His fascination with the way government and technology intersect led him to write his ebook in 2012. 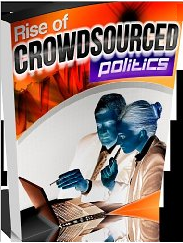