Robin Byrd, Co-Star of Debbie Does Dallas and TV Host of the Robin Byrd Show, to Perform in NYC for the First Time Since Her Raccoon Attack with Recording Artist Lovari

New York, NY -- (SBWIRE) -- 02/02/2016 -- Actress and entrepreneur, Robin Byrd, the host of the 30 year syndicated television series "The Robin Byrd Show" and co-star of the classic adult film "Debbie Does Dallas", will perform for the first time since being attacked by a raccoon on Fire Island last autumn.

On Wednesday, February 3rd, 2016,  Robin Byrd and singer Lovari will headline Winter Royal T, at Boxers HK in NYC, where they will perform their dance single "Touch Me", and Lovari's new single "Te Siento (I Feel You), currently on the iTunes Top 100 and Billboard. It will be hosted by celebrity chef Stephen Daniello and music throughout the evening provided by DJ Ian Ford and DJ Susan Levine.

Photo by Lorenzo Mollicone (Permission to use) 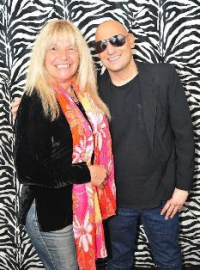