Texas troubadour set for a breakout year in 2012

Boston, MA -- (SBWIRE) -- 04/13/2012 -- Rodney Hayden’s upcoming single, Buckaroo Man, has been chosen by Red Sox starting pitcher Clay Buchholz as his 2012 introduction song at Fenway Park. Buckaroo Man will debut on April 14 in Boston as well as be released to all major digital retailers. It is the first single from the upcoming album titled Atascosa Sand (release date TBA). Hayden will embark on a nationwide radio & television tour beginning on April 14 in Boston and crisscrossing the country for the better part of six weeks.

Rodney Hayden recently announced an agreement to work with Platinum Marketing International in Boston, MA for booking and management. Hayden has also teamed up with Westward Entertainment in Denver, CO to oversee radio and publicity. Atascosa Sand will feature a duet with Kelly Willis as well as four songs written by Hayden and Bubba Strait. He will perform many of the songs from the upcoming album (for the first time in front of an audience) during his first ever StageIt concert on April 19, 2012 at 7:05 PM. Tickets to the 30 minute acoustic concert are limited and available at http://www.StageIt.com

If you have any questions or to request promotional material or an interview with Rodney Hayden please contact Nathan Cormac at WestwardEntertainment@gmail.com 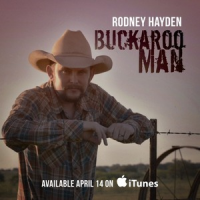