RodyCoronel.com Launches to Acclaim for His Ambient Music

The Hague, Zuid Holland -- (SBWIRE) -- 11/14/2012 -- Electronic music has come a long way. Starting off as extremely experimental avante-garde buzzes and bleeps, it has evolved into lush instrumentation that seems capable of almost any sonic effect. It has had a profound influence on the music scene, and culture in general. The majority of tracks produced today have some kind of electronic element.

One artist that is blowing up in the electronic music scene is the Dutch musician Rody Coronel. His website can be found at RodyCoronel.com. Coronel’s unique blend of ambient and classical electronica has won him many fans across the globe.

Coronel brings a classic, almost orchestral quality to his music. One of his first forays into music was a long stint playing the organ. This influence is clearly carried into his present work, giving it a Jean Michel Jarre-esque feel.

He has a sound that is reminiscent of the pioneer days of electronic music. Echoes of classic electro outfits such as Kraftwerk and Tangerine Dream drift through his songs. There are even shades of the Japanese artist Isao Tomita, one of the originators of synth music. However, on the whole, his sound is more subdued and ambient than these predecessors.

His website contains tracks that visitors can listen to for free online, as well as links to his two full length albums which can be downloaded directly through the site. His latest studio album, Coffee Moment, is a collection of 11 ambient music tracks.

Rody Coronel himself said: “I’ve been playing music since I was a child, starting with a Korg Poly Six synthesizer, then swiftly moving on to lessons on a full size organ. After seven years of organ lessons I decided to stop, but it wasn’t long before the call of the music got the better of me. I started playing synths again at a friend’s house and I was absolutely hooked. After I bought some equipment, I started composing original tracks and putting them on the Internet. I was shocked and delighted at the huge amount of attention that they got. I started to gather a fan base, and soon released a full length album called “Mixed Feelings” on DZOS records. The album is available for download on my site, as is my latest album “Coffee Moment.” Now I am starting to compose some new tracks, which will be also released to the site as soon as they are done.” 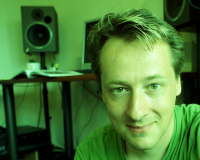