Russian Import of Sorbitol Has Exceeded 34 Thousand Tonnes in 2015

Moscow, Russia -- (SBWIRE) -- 06/01/2016 -- Sorbitol is the main sugar substitute consumed in Russia – its application is widespread in different areas, including the production chewing gum, toothpaste, medicines, diabetes and dietary products and many others.

As per UN data, in 2015 Russia has imported over 34 thousand tons of sorbitol – mainly from France (23,8 thousand tons), Germany (5,1 thousand tons), China (2,6 thousand tons) and Indonesia (2 thousands tons), no internal Russian manufacturer has set up a commercial production of this product so far.

Despite the weakening of Russian national currency and the decrease of sorbitol imports by 19,7% in 2015 in comparison with 2012, Russia is still the fourth largest importer of sorbitol in the world.

In terms of changing market, Russian distributors are looking for sources of generating added value and launch new products to the market. In particular, in 2016 the new product has showed up on the shelves of Russian retail stores – sorbitol under "Novasweet" trademark.

The retail price for 500 grams of sorbitol is only 179 rubles (nearly 2,75 US $) challenging to occupy a great market share of sugar substitutes and diabetes products. According to the national registry, the quantity of diabetics in Russia equals 3,3 million persons, while unofficial estimate is nearly 9 million men. Nevertheless, the market capacity is quite impressive as the consumption of common sugar in Russia exceeds 5,5 million tons per year.

Whether sorbitol succeeds or fails in the sugar substitutes market, many consumers however can experience its' health benefits in case they bother reading the caution written with small letters on the reverse side of the package. Otherwise, buyers might also experience something else due to the laxative effect that is common for sorbitol when being consumed in large quantities.

According to the trade report provided by IMRA, in 2015 the main consumers of sorbitol in Russia were the following companies:

- Branch of Wrigley in Saint Petersburg, which has imported more than 10 thousand tons of sorbitol in 2015. Wrigley is the largest manufacturer of chewing gum in CIS region;

- Mondelis rus – 3,5 thousand tons of import in year 2015. Mondelis is the manufacturer of chewing gum under "Dirol" brand;

Average prices for imported sorbitol in 2015 varied from 490 US $ per metric tonne of 70% solution produced by Kasyap Sweteners Ltd. (India) to 1 110 EUR for crystalline Neosorb P60W supplied by Roquette Freres.

Sorbitol trade report provided by Industrial Markets Research Academy offers an invaluable advantage when developing and/or correcting the strategy of supplies to Russian market. The report grants the user with knowledge of current competitors, consumers, their supplies volume and prices of supplies. 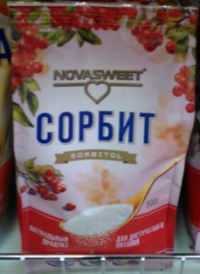