Hesperia, CA -- (SBWIRE) -- 07/08/2013 -- A new crowdfunding project has been launched in hopes of raising $25,000 to fund the first phase of development of the Safer Shower product. Creators of the product hope to reduce the estimated 234,000 shower accidents annually reported in the United States. The Safer Shower fitting item will connect between the existing shower pipe and the shower head to distribute shower products directly into the water stream during the showering experience. “We think this will be especially beneficial to the people who have limited mobility or range of motion.” said David Green, Creator of Safer Shower. “When we consider people with arthritis in their back for instance, or amputees, or even people with hip replacements - we can see where bending over for a dropped bar of soap could be a struggle. That’s why we’re so eager to help people with these special needs.”

The device will be equipped with an on/off-dispensing valve that will regulate the amount of liquid dispensed during a shower. It will also have a refillable reservoir for quick and convenient interchanges of desired products during the course of the shower. For instance, one container can be filled with body wash while yet another can be filled with shampoo. This option is fundamental both for convenience and necessity.

While the product’s patent is pending the SPLASH Fitting developers have contracted the COG Engineering company based in San Clemente, California to develop the product prototype. With three stages in need of accomplishment prior to the product becoming available to the public at large the developers welcome funding assistance to move them through every stage affectively. The first needful stage is the development of the prototype, the second stage is the production of test fittings and the subsequent testing of those fittings, and the third stage of development is the creation of a mold for finish parts production. The design of the product will include the ID design and selection, 2D and 3D modeling, mockups - all 2 piece mockups made from SLA - and testing procedures. The overall estimated price for prototype, injection molding and marketing is $100,000 however Green will focus on funding for the next sixty days in order to raise money for the development of the first stage - the prototype.

Crowdfunding perks include engraved gifts, plaques, public regards, a manufacturer’s drawing of the product, a patent application copy with a corporate seal, and for a $2500 contribution a dedicated web page for the donor’s company launched on the developer’s website. 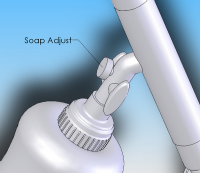