Janet R. Stafford’s debut novel tells the captivating tale of struggles at the edge of America’s Civil War; all from the perspective of Maggie, the book’s formidable heroine.

Hillsborough, NJ -- (SBWIRE) -- 09/06/2012 -- The 1860s brought not just Civil War, but a host of personal and cultural struggles that tested the nation’s integrity. Now, one hundred and fifty years later, writer Janet R. Stafford offers a vivid and fascinating insight into the period with her new novel, ‘Saint Maggie’.

The book is told from the perspective of Maggie, a tireless widow running a busy boarding house in the middle of her town. However, when asked to house a respected Methodist minister, Maggie quickly learns that her swift decision could have perilous consequences for both her life and the entire town.

Maggie, a widow with two teenage daughters, runs a rooming house smack dab on the town square. In 1860, this makes her a social outcast – boarding houses are hardly respectable. And her collection of eclectic boarders – a failed aging writer, an undertaker’s apprentice, a struggling young lawyer, and an old Irishman – only brings her snubs and snide comments, as does her friendship with Emily and Nate, an African-American couple with whom she shares her home and chores.

So Maggie is stunned when she is asked to provide a room for Jeremiah Madison, the new and very gifted Methodist minister. He may be able to revive the little church she attends and provide her boarding house with some badly-needed respectability. But Jeremiah comes with secrets that will change Maggie, her friends, and her town forever.

As the author explains, the book is based on a true-life historical event.

“Saint Maggie grew out of a paper I wrote while in graduate school about Rev. Jacob Harden, a young pastor and gifted preacher in Warren County, NJ. He was charismatic, good looking – and quite the ladies’ man,” says Stafford, of her debut publication.

She continues, “A few un-chaperoned moments with a parishioner on New Year’s Eve led to the inevitable shotgun wedding – and eventually to a crime. My book’s underlying themes explore slavery, religion, racism and women’s rights, told from Maggie’s perspective. It also tells an intriguing tale of complex relationships and how a pastor’s the betrayal of trust tears apart the fabric of a tightly knit town.”

Due to its historical likeness and content, Saint Maggie has garnered much attention from within historical circles, as well as a series of rave reviews. In fact, the book has achieved consistent five-star ratings.

“The twists and turns are fascinating, the storyline is very real, and the characters are well written,” says Ruth Anne, reviewing the book on Amazon.com.

Another reader, NeoGio, was equally as impressed.

“The vivid descriptions of the period are so well written I almost felt like I was actually there. The characters were so rich, I found myself rooting for the heroine, Maggie Blaine even when it seemed she was naïve.”

With such rapid success, Stafford is conscious not to lose sight of the book’s vitally important message.

“Our world today is as uncertain as Maggie’s. Her faith and her belief that life’s journey is about hope and love gave her strength. I believe that today we must decide whether to give in to the forces of darkness and violence or to vanquish them with the power of love,” she concludes.

*Having been inspired by Maggie, the author has chosen to donate $6.00 from each purchase towards care for a local child who suffers from ALD, a degenerative disease which will progressively destroy his mobility and communication.

About the Author: Janet R. Stafford
Janet R. Stafford was born in Albany, NY, but spent most of her childhood and all of her teen years in Parsippany, NJ - so she considers herself a Jersey Girl. She received a B.A. degree in Asian Studies from Seton Hall University in South Orange, NJ.

After getting her B.A., Janet worked as a secretary/administrative assistant for several companies, but finally gave into rather persistent nudging from the Almighty and enrolled in the M.Div. program at Drew University's Theological School (Madison, NJ). Some years later, she returned to Drew to pursue a Ph.D. in North American Religion and Culture.

Janet has served six churches over the past 20 years, working predominantly in the areas of education and ministries with children and youth. She also has worked as an adjunct professor for Fairleigh Dickinson University (Madison, NJ) and Kean University (Union, NJ).

She started Squeaking Pips Press, Inc., a micro-publishing company, in 2007. 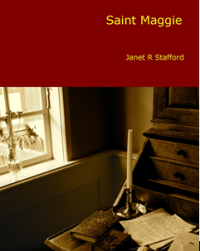