ScriptWriting101: Selling a Screenplay in the 21st Century Teaches Newbie Writers How to Write and Get Their Scripts in the Right Hands

San Diego, CA -- (SBWIRE) -- 04/23/2014 -- Writing a screenplay is hard work, but selling a screenplay to Hollywood is downright daunting. Not one to back down from a good challenge, ScriptBully Magazine editor Michael Rogan is convinced he can help aspiring screenwriters do both. His audiobook Script Writing 101: Selling a Screenplay in the 21st Century spills all his script-selling secrets and lightens the intimidation of writing and selling a screenplay without an agent.

“Newbie screenwriters think that everybody in the film business spends countless hours coming up with diabolical ways to keep them out,” says Rogan. “The truth is, they want you.”

According to Rogan, Hollywood is always looking for the next great screenwriter. To give his listeners a better shot at being what Hollywood is looking for, Rogan wears two hats. During the first part of his 85-minute audiobook, Rogan acts as a writing coach helping screenwriters polish their scripts for producers’ eyes. In the second half, he teaches screenwriters how to get those polished scripts into the right hands.

With clear action steps summarized at the end of each chapter, Rogan guides listeners every step of the way from drafting to pitching.

“This book will change the way you look at selling your script,” says Big Mike 0311, an Amazon customer reviewer of Rogan’s audiobook. “Writing is only half the battle. This book gives you the more important half. The sell.”

Script Writing 101: Selling a Screenplay in the 21st Century is available now for download from Amazon. 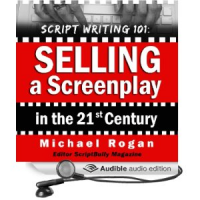