After releasing well-received singles "Fake," "Rising" and "Believe" and appearing at the LME Showcase, Ontario rockers Second Nature are working to release their recording debut.

Las Vegas, NV -- (SBWIRE) -- 01/13/2014 -- “Loud is what we are. Loud is what we play.” This is the mantra of Peterborough, ON, rock band Second Nature, a band you’ll soon find lighting up the stage at the Landmark (LME) Showcase Competition at the Virgin Mobile Mod Club in Toronto, ON, on August 31.

Second Nature will participate in LME’s annual Showcase Competition to perform in front of industry reps from Universal, Sony Music, Indica Records, Feldman Group, Much Music and more plus managers, signed artists and publicists. They are competing to move on to the final round where they will have the chance to win more than 40 hours of EP recording time, a sold-out industry showcase at a prestigious Montreal venue, label submission, a non-exclusive licensing contract, global distribution and publicity campaigns—all of which could take the group to the next level.

Second Nature are often compared to two of their influences, Staind and Godsmack, and also draw inspiration from other hard rock groups like Breaking Benjamin, Tool and Metallica. They attribute their hard, anger-fueled sound and lyrics to failed relationships, which they deem to be some of the best fodder for writing their style of music.

Second Nature’s first singles include “Fake,” and “Rising,” and “Believe,” and they’re currently working on an EP, though a release date has not yet been finalized.

“Fake” kicks off with a fast, menacing guitar lick repeated with various levels of urgency thanks to driving percussion. With each set of four licks, that percussion evolves into the hard rock rhythm that weaves the instrumentals together throughout the rest of the song. The vocals are angry and intense, with the charge, “You’re so fake,” repeated throughout the song, and pull you into the frustration emoted by the singer. Guttural screams introduce choruses and carry the song to its emotionally built-up ending for an altogether fast-paced, high-energy track from start to finish.

“Rising” is another one of their harder tracks with a heavy, powerful distorted guitar intro that opens up into a melodic, kinetic bass line that’s featured during each of the verses. The vocals in the chorus are the soaring kind of lyrics crowds can’t resist but yell back to the band in a live performance. The song ends on a high note when the guitar and bass join for a determined reprise of the power-hungry intro, leading into a rushed final gasp of rhythmic distortion and the fading vocals, “In your eyes.”

“Believe” is the tamest and most laidback of the three singles, venturing into the realm of an indie ballad with its twinkling piano intro and interludes and feathered cymbal beats. An emotional guitar line intertwines with impassioned vocals that ultimately show the softer side of the group. By the second round of the chorus, the guitar distortion and solo that follows pick up the energy of the track and bring back some of their hard rock essence, which plays through to the end of the song.

Besides the LME Showcase, another upcoming show includes a performance at Little Texas in Belleville, ON, on Sept. 26th. Check them out at Sonicbids or on any of their social channels. 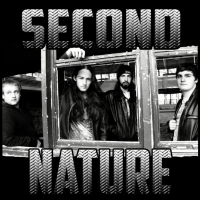