Concerns go international as protestors in the U.S. march in support of the arrest of Joris Demmink, the secretary general of the Ministry of Justice in the Netherlands.

Washington, DC -- (SBWIRE) -- 10/24/2012 -- Joris Demmink, the Secretary General of the Ministry of Justice in the Netherlands, has been consistently linked to the sexual assault of young boys. His career as the Secretary General has met with many inquiries and investigations of child abuse and sex slavery, which has sparked members of Congress, including Congressman Chris Smith (R-NJ) to ask the Dutch for a “transparent” investigation. The Washington Times last month compared Demmink to Jerry Sandusky of Penn State, saying the only difference between the two is Sandusky is in jail. The recent media blitz of Demmink’s crimes has also fueled an online petition at http://www.ArrestDemmink.com where visitors are asked to contact Queen Beatrix of the Netherlands to share their outrage. "People are concerned a government official with allegations such as these would be awarded a government pension and recognized by the Queen", said one protester.

Kwame Fosu, the policy director for The Rebecca Project, said in a statement before the march that the protest was to call “the world’s attention to a shocking and outrageous situation in the Netherlands.”

“For years, Mr. Demmink has used the power of his office to thwart investigations into this despicable behavior,” he said. “This year, as more of Demmink’s victims speak up and demand justice, The Rebecca Project is leading a series of worldwide actions to force the Dutch government to deal with this matter as is required in a civilized world.

“One of the most frustrating aspects of Demmink’s reign of terror is his plan to retire from the Dutch government – WITH HONOR – very soon. When he does, it is widely anticipated that he will escape punishment for his crimes by fleeing to a non-extradition nation, where he will continue his perverse activities while being supported by the Dutch pension system, APG Asset Management,” he said.

About Rebecca Project
The Rebecca Project has been at the heart of the call for justice along with Shared Hope International. Both organizations help protect women and children against exploitation and sex trafficking. The campaign against Demmink has gotten world exposure through the website http://www.ArrestDemmink.com, where people are being asked to join the fight against sexual abuse of children by contacting Queen Beatrix of the Netherlands to voice opinion about the scandal caused by her Secretary General of Defense, Joris Demmink.

Watch this video to hear from the victims: http://www.youtube.com/watch?v=vJKSusZsfdg&feature=youtu.be 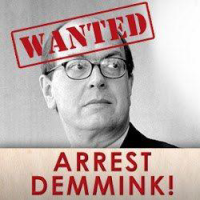