Secrets Can Be Told: Life-Changing New Book Urges Children to Speak out Against All Types of Abuse, More So, on Sexual Abuse, Which Has a More Devastating Effect on the Whole Life

Speaking straight to the hearts and minds of young readers, Linnet Brown’s powerful new book seeks to prevent sexual abuse while encouraging child victims to come forward, speak out and put a stop to the horrific crimes they are suffering.

Toronto, Ontario -- (SBWIRE) -- 05/14/2013 -- While millions of children come forward and expose sexual abuse, millions more suffer in silence. In an attempt to speak directly to children and teach them not to be afraid to expose their trauma, Linnet Brown is delighted to announce the launch of her compelling new book.

‘Secrets Can Be Told’ uses story and vivid characters to help children identify dangerous situations and make any existing worries known to adults.

It has been said that 'It takes a whole village to rear a child'. Although that may have been the situation when it was first said, it is no longer the case. This story uncovered and exposed the risks children are facing in our societies every day. Follow Jamie, his friends and parents as they discovered that we are living in a society where children fall prey to people who have power over them.

They learned that children who are poor fall victims to people whose intention are to exploit them. There are people who are using the church as a mask to have access to children only to sexually abuse them. But there are people who are making a difference in the lives of children who are at risk. Secrets Can Be Told is a book that has been skillfully written to help children to identify situations that would put their safety at risk and make it known. Every child should read this book, especially children whose parents do not normally hold conversations of sexual nature with them.

As the author explains, her book provides the anti-abuse education that so many existing resources lack.

“We cannot deny that too many of our children are getting abused in our societies today because they are not educated to identify when they are at risk of being abuse. Some children who have been subjected to abuse are afraid to come forward and talk about their ordeal,” says Linnet, who is passionate about the care for and welfare of children

She continues, “This book will encourage both but it is a preventative measure to save as many children as possible and enable thousands more to come forward. If we can change just a few lives by teaching children the warning signs or by encouraging existing victims to come forward, it’s a job well done.”

Critics praise the author for her diligent attempts to change the lives of others. However, to Linnet, it’s a calling.

“I’ve raised my own beautiful children and have fostered others for over a decade. However, too many children are denied the basic care they’re entitled to and there are simply too many victims of abuse. I’m now on a mission to do my bit and end the plight that shatters millions of lives,” she adds.

‘Secrets Can Be Told’, published by Xulon Press, is available now: http://amzn.to/144RbWv

About the Author: Linnet
Linnet enjoys working with children. Over the years she has worked with children in different professional settings. Such as, a Teacher, Day Nursery Manager and Qualified Social Worker. Linnet had also fostered young people for over ten years. Linnet is a Christian and uses stories to teach moral values to children.

Over the years Linnet continues to be involved in charity work for children. She is currently offering financial support to children in Africa and the Caribbean towards their education. Linnet has written other children books for children and teenagers. 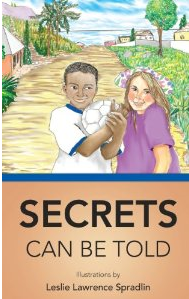