In her ground-breaking debut book, Helen D. Newton sets out to discover the real truth about the practices and teachings of the Mormon Church. From racism and the deep involvement of Mitt Romney; are the rumours surrounding one of the most misunderstood religious denominations actually true?

Bloomfield, CT -- (SBWIRE) -- 07/05/2012 -- As Helen D. Newton will attest, most people know very little about the Mormon Church. From the misconception that the Church is Christian to the widely publicised rumours of racism, the Latter Day Saints, one of the largest denominations is steeped with mystery. Now, for the first time ever, the teachings and practices of the Mormon Church are thoroughly investigated in, Secrets of the Mormon Church: Are These Mitt Romney’s Beliefs?

The book exposes the author’s investigation into rumours surrounding race and racism within the Church. When the truth becomes apparent, both conflict and triumph ensue. Readers are taken on a journey into the author’s own travels as she sojourns to find the truth in a spirit of resistance and resilience.

Ultimately, she uncovers secrets that pale in comparison to the rumoured racism.

“I believe that it is important to know what you are actually joining when you become a member of this church” explains Newton, who admits that she too was misinformed before becoming acquainted with the denomination’s true character.

Continuing, “The American people need to know as much as possible about the Mormon Church.”

The Church has become the topic of much debate following Mitt Romney’s successful nomination bid. Newton believes that, while the public is more aware of the Church’s presence than ever before, Americans deserve an opportunity to discover the real facets of its teachings and culture.

“From the beginning of this election cycle, even the Republicans have been slow to embrace Mitt Romney but most were not sure why. It was just a feeling. Perhaps this book will inspire some who are politically gifted to connect some of the dots in uncovering a longstanding plan on the part of the Mormon Church to control this country” she adds.

Written for Mormons, theologians, politicians and those who simply aspire to know the truth, Newton’s work is poised to both inspire and inform those who boast an open mind.

Secrets of the Mormon Church: Are These Mitt Romney’s Beliefs? will be available from July 4th, available for purchase from Amazon.com.

More information can also be found at: http://www.decbooks.com/books/Newton/Mormon/web/index.html

About Helen D. Newton
Helen Newton is a 57 year old African American ophthalmologist born in Harlem and raised in the Bronx.

She is a mother of two, grandmother of two presently living in Connecticut and has been a member of the Church of Jesus Christ of Latter Day Saints for the past 15 years.

She has a Bachelor's Degree in Theological Studies and a Medical Degree from the University of Medicine and Dentistry of New Jersey. 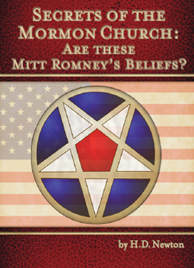