Masterfully crafted by Jan Spivey Gilchrist and Kelley Powell Barcellona, ‘Secrets of the Seven Stars: Elly's Awakening’ fuses a fantastical adventure and merges seven continents with an inspirational showcase of the true power of family and friends. Gilchrist has a string of literary awards to her name and, coupled with Barcellona’s extensive experience as an educator, both contribute unique skillsets to such a bold novel.

Orlando, FL -- (SBWIRE) -- 09/30/2014 -- While the world of literature claims to contain wondrous page-bound delights for all ages, seven to ten year-olds rarely have any fiction written for their unique transitionary age. Thankfully, authors Jan Spivey Gilchrist and Kelley Powell Barcellona are bucking the trend with gusto to provide children of this age group with not only an edge-of-the-seat story, but an opportunity to learn plenty about life along the way.

‘Secrets of the Seven Stars: Elly's Awakening’ uses an engrossing page-turning fantasy backdrop to promote solid familial bonds, appreciation of friendship and the recognition that young girls have the innate right to take charge of their future.

Ten-year old Elly is furious with her three horrible brothers and her clueless parents. Her only fun times are with her best friends. In a fit of rage, Elly is thrust out of her living nightmare and into a magical place, which seems to be the answer to her dreams… but creatures and demons lurk around every corner. Elly realizes with the sparkle of magic comes darkness, and she has to face things far worse than any brother. She races against time and unearths a shocking secret about her own heritage. And as her tangled life untwines, she awakens to the mysteries of family and the ancient magical ties that bind her with her six best friends…

“This narrative transcends straight fiction to give all young readers tangible life lessons,” explains Gilchrist, who was awarded the 1992 Coretta Scott King Honor, 2014 Zora Neale Hurston Award and half a dozen other accolades. “The entire story is based on a foundation of rock-solid relationships between siblings and a bold display of ‘girl power’”.

Continuing, “Seven girls represent the seven continents of the world and discover that they are all intertwined. The story doesn’t exclude boys at all – but we have injected heaps of positive influence for girls in order to counterbalance the lack of attention they often get within the world of fiction.”

Barcellona makes it clear that the story will delight and enthrall all young readers.

“We’ve sewn together a tight fabric of secrets, mysteries, magic, fairies, princess, and demons; there’s literally something for everyone. Fantasy and mythology find themselves represented equally in a book that educates as much as it entertains,” she adds.

Due to the book’s initial success, the authors have recently announced plans to turn it into a series. With the next title already on the writing table, the Seven Sisters have plenty more to share.

Until then, ‘Secrets of the Seven Stars: Elly's Awakening’ is available now: http://amzn.to/W8iKPy

About Jan Spivey Gilchrist
JAN SPIVEY GILCHRIST is the award winning illustrator of 74 children’s books. She is the author of 5 picture books, and she coauthored 1 novel. Dr. Gilchrist illustrated the highly acclaimed picture book, The Great Migration: Journey to the North, winner of the 2012 Coretta Scott King Honor Award, it is also a Junior Library Guild Best Book, NAACP Nominee, a CCBC Best Book for 2012 and Georgia State Nominee. Gilchrist also won the 1990 Coretta Scott King Award for her illustrations in Nathaniel Talking and the 1992 Coretta Scott King Honor Book Award for illustrations in Night on Neighborhood Street, all written by Eloise Greenfield. My America, written and illustrated by Jan Spivey Gilchrist with illustrations by Ashley Bryan, is a Parents' Choice Recommended Book Award Winner for 2007 and was selected for the National Book Festival, also in 2007. Books illustrated by Gilchrist have received ALA Notables and numerous other prestigious awards. She was inducted into the Society of Illustrators in 2001 and into the International Literary Hall of Fame for Writers of African Descent in 1999. Gilchrist received an MA in Painting from the University of Northern Iowa, an MFA in Writing for Children from Vermont College and a doctorate degree in English from Madison University. She is a member of the Society of Children’s Book Writers and Illustrators. She lives in Olympia Fields, Illinois.

About Kelley Powell Barcellona
KELLEY POWELL BARCELLONA’S first middle grade novel, The Hive, was published by Pegasus Books for Children in 2009. Her first short story “Dirty Little Town” was published in Fantasies, Anthology of World’s Great Short Stories. She earned a Master of Fine Arts in Writing for Children at Vermont College. Kelley is a member of the Society of Children’s Book Writers and Illustrators. She was a middle school teacher and college professor in Tampa, Florida. Kelley currently lives in Windermere, Florida with her family. 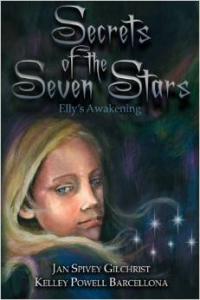