See Ya: Horrors of War Meet Power of Love in Compelling War-Themed Novel by Cheryl Kerr That Chronicles the Odyssey of Two Families' Puzzling Connection from World War II to 1996.

Kerr’s celebrated novel takes the battlegrounds down to the grassroots level of the individuals who realize that their own sense of right and wrong was compromised in the name of serving their countries. Garnering admirable reviews from readers and critics, ‘See Ya’ makes war deeply personal, hitting all too close to home.

Austin, TX -- (SBWIRE) -- 09/27/2013 -- As over sixty million people lay dead at the end of World War II, the descriptions and images of blood-ridden bodies made many forget that sixty million personal stories, hopes and dreams had also been lost for good. In her emotive yet vitally-important latest novel, Cheryl Kerr illustrates the values and struggles of the men that served their countries and their families.

‘See Ya’ has seen dramatic success since its publication, honored as an Indie Award finalist in 2010 for Military Fiction.

Lives are often stories not yet written down. Not always ended, either, which can fuse the living and telling into a path not always clear. Some tales take awhile to tell, especially when they start in 1944 and flow into 1996, and the characters weave in and out across those years without knowing one another.

Retired Colonel Matthew Rankin s sudden death at a party in 1996 leaves a gap in many lives. Deepest, perhaps, in that of his daughter, Manda, whose grief is overwhelming as she realizes how little she knows of who her father was. His strict and formal way kept Matthew at odds with his daughter. The coincidental arrival of Pieter Becker, a man following a just-found trace of his own father s World War II disappearance, sets the two of them in motion to solve the puzzle of their fathers’ connection. At first, the only clue they have is a photo taken of the two men together in Grand Central Station in 1975 by Willi Prang, a garrulous former WWII POW who says he knew Pieter s father. In 1975, Matthew Rankin was an on-the-rise Colonel in the United States Air Force, successful and devoted to doing the Pentagon s bidding.

The other man in the photograph is Pieter s father, Franz Becker, according to Willi Prang, whom Pieter meets at a reunion of ex-German POW s. But Pieter s father died in World War II. Or did he?

As the author explains, her novel reaches into the intimate lives of soldiers and families of those who serve; an inspiring story that makes global and personal first cousins of words.

“It’s about the strength and power of love, between fathers and daughters, sons, and the call of memories, even across more than half a century. It tells the story of doing the right thing in the face of opposition, in the name of the people that we hold dear,” says Kerr.

Continuing, “World War II and the Greatest Generation have lessons that should never be forgotten. This book brings the story of this war to the tangible, reachable level that readers can identify with.”

“Like many novels and films about the subject, See Ya does not shy away from the horrors of war, but it also focuses on so much more, demonstrating that for all of our flaws, humans are capable of great kindness and wonder. Emotionally moving and well-crafted, the novel is a testament to the power of love in all of its forms and, above all, a tribute to lives of quiet, unsung rectitude,” says Marc Schuster of Small Press Reviews.

Katharine Kimbriel was equally as impressed, adding, “It's lovingly written, and belongs on your shelf. I can't begin to choose a passage to quote -- it's woven like a summer haze, a dream you will wake reluctantly from. Give it a try. I don't think you'll regret the journey.”

With Veterans Day fast approaching on November 11, the book’s popularity is already on the rise.

Interested readers are urged to purchase their copies as soon as possible.

‘See Ya’, published by Chanter Press, is available in print from the press, Chanterpress.com, Amazon, Barnes and Noble and may be ordered through any bookstore. It is available as an eBook through Lulu Press.

For more information on the press and author, please visit Chanterpress.com.

About the author
Cheryl Kerr is a native Texan and grew up in both military and civilian settings. See Ya is her second novel, she has written both fiction and nonfiction.

She lives in the Texas Hill Country with her family and a horse named Hallelujah. 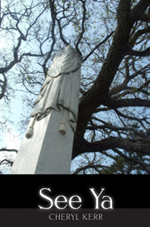