Atlanta, GA -- (SBWIRE) -- 03/04/2013 -- With the uncertainty of the US budget crisis in the midst of a down economy, selling off junk cars and other large appliances for scrap metal has become an interesting endeavor in terms of investments and portfolio diversification. As the price of both scrap and precious metals are on the rise, there is increasing activity at all levels of the supply chain with an interest in acquiring scrap for money.

The beginning of the supply chain can be a crude and grueling enterprise. Men and women across the United States wake up at very early hours of the morning to travel to different communities in search of unwanted metals in garbage bins, storage units, public property, or left out on the side of the road for pickup. These metal hunters have been coined as “scrappers”, ending their days at dusk by traveling to junkyards that offer cash for specific types of metal and other materials. In the UK, these are known as “scrapyards” while in Australia, Canada, and New Zealand they are referred to as “wrecking yards”.

Junkyards will store, crush, and compact purchased metals and then re-sell them to firms that specialize in reforming. Reforming the metals often involves melting them to their original form, and then reproducing them into different products. Many of these products are reintroduced to the market, and often wind up back in junkyards, cycling through the industry. As a result, the metal scrap industry is one of the most highly recycled in the world.

According to a report, “Business is booming at scrap yards, where recycling and metal dealers are seeing a growing number of homeowners and non-traditional clients making the extra trip to cash in their used bikes, old tools and discarded soda cans. The scrap yards also have their share of regular customers, including contractors, who consider what they expect to earn in scraps when they bid for a job, and peddlers, who drive around retrieving metal discards.”

Indeed, a common junkyard in any given American city or town can net $3 for an old bike, $20 for the copper parts inside of an old air conditioning unit, $40 for a cast iron bathtub, and a few hundred dollars for an old automobile.

Junkyards help jumpstart the metal economy by offering a price per weight of the most common base metals. These include aluminum, brass, copper, iron, lead, nickel, steel, stainless steel, and zinc. According to Infomine.com, as of 25 February 2013, the prices (by pound) for these metals are as follows:

As the industry has become globalized, more investors are looking to sell metals oversees in places where demand is higher. Due to a rapidly growing manufacturing sector in China and India, prices of metal are rising around the world. As a result, a small-scale market boom has been experienced in the United States.

Metal market analysts have reported that “international demand in steel and metals has fueled price increases, despite the beleaguered economy.” And according to one analyst, “Metal prices are up anywhere from 100 percent to 500 percent from where they were a decade ago.”

Turkey has been listed at the largest consumer of American scrap metal, and is also the hub for commodities shipped to the East from Europe. As such, thousands of tons of scrap metal is resold from Turkey to international buyers, making the country the junkyard of the globe. And while that label could be perceived as a pejorative, this political-economic reality has helped Turkey’s economy in a massive way.

According to the same report, this picture was starkly different as recent as 2009:

With 24.6 tons of scrap metal exported that year, the U.S. was the world’s dominant supplier, producing almost as much as the total of the next two on the list, namely, the European Union with 16.8 million tons and Japan with 10.3 million tons. While in 2009 Turkey was already the top purchaser of EU-sourced scrap metal, consuming a robust 8.3 million tons, it was well behind China when it came to taking U.S. scrap.

This not only says a lot about Turkey’s growth in the last half decade, but also demonstrates that American scrap is in high demand the world over. This translates into incoming purchases from countries all over the globe, and is one of the reason that the scrap metal industry is being eyed by investors and venture capitalists alike.

Investing in the scrap metal industry is rather inexpensive. Major pitfalls of breaking into the industry is simply having enough space to store metal in bulk (as scrap is more valuable in bulk than small-scale, direct transactions), the technology to compact it, and the knowledge on how to ship it abroad.

Because scrap metal is a commodity, it is bought and sold as such. For investors, this means that sales and purchases are created among market lines and basic mathematics can help predict rates of return. This is in contrast to volatile markets for goods that are bought and sold irrationally, or are pegged to rapidly changing environments that are prone to risk.

Investors should also know that scrap metal can be rather costly to dispose of. This means that if a buyer cannot be sold, a certain amount of cost must be made to dispose of scrap metal that cannot be sold. There is a risk when purchasing in bulk, but bulk sales is really the only way to make large profits in this industry. As such, this is an Achilles’ heel of the industry.

Nevertheless, the products can now be bought and sold online, so investors must have some expertise in shipping product, often abroad. Those considering getting involved in this industry should find out all of the requirements for exporting this type of commodity, as well as research how much it will cost by using shipping through intermediaries (middle men) assuming a major trans-ocean shipping line is not owned by the investor at large.

While export handlers should be able to handle any investor with this issue, it is good that know that containers loaded with scrap metal bound for foreign purchasers do not have to be screened or inspected at port. Port authorities will, however, randomly scan containers for chemical and radioactivity; all exporters are required to fill out declaration and compliance forms for their own export/port authority.

For investors with a lot of capital and a decent amount of space to store metals, the scrap metal market is a great way to diversity a portfolio and make a lot of extra income. As metal continues to rise, and countries continue to develop, those who break into this industry will be of increasing demand for any developing economy around the world.

A national company, www.autowranglers.com has 250+ locations that buy junk cars for market prices. They can be reached at 877-845-7378.

Angie Picardo is a staff writer for NerdWallet. Her mission is to help investors stay financially savvy and save money with NerdWallet’s low interest credit cards. 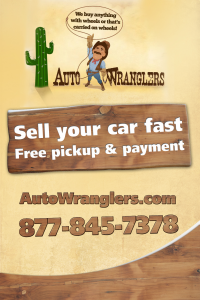