Durango, CO -- (SBWIRE) -- 02/18/2013 -- Before stand-up and reality TV paved the way to a career in humor writing, a budding humorist’s only chance at tickling a bookworm’s funny bone was landing an article in a well traveled magazine. In the post-Seinfeld apps are the latest way to turn funny into money.

Bolstered by the success of writers like Amanda Hocking and Michael Prescott, “Pocket publishing” has opened up a whole new world of publishing for budding young writers. And then there’s Ronald E. Hudkins. At 63, Hudkins is part of a growing sector of mature creative types taking advantage of the new publishing landscape.

“It used to be you had to pound the pavement with a briefcase full of manuscripts,” Hudkins acknowledges. “Knocking on Simon and Schuster’s door has been replaced with sipping a large latte while you upload at Starbucks.”

Like everything else, it would seem, the process of getting your book on the coffee table of millions can be just clicks away.

Hudkins Android and iOS offering takes people to an author’s writing platform (http://www.ronaldhudkins.com) that introduces people to the book Senior Things I Said, Say, Did and Do Volume One. The platform contains short stories told by the author, biographical information and reviews and of course, a call to action to purchase from Amazon. One thing that might take the user by surprise is an endorsement to read and laugh from none other than President Barack Obama (a parody).

The book itself houses musings from a surly yet lovable senior navigating his way through fast-food fiascos, the new cyber-terrain, and the inevitable chill-down of old age.

While it’s broken into sections and chapters, Senior Things I Say is really just an excuse for some sharp George Carlin-esque rants with some very pointed jabs at life. Intriguingly silly titles like "Is Rice a Vegetable?" "Just Another Dumpster Dive" and "Being Nice is Overrated" let you know this senior isn’t willing to retire his opinions, at least.

Is Ronald E. Hudkins fiercely old fashioned or strikingly savvy? In his mind, at least, he is the newest hybrid of senior. “My grandkids call me Robogramps. I’m an online publisher, I dabble in online marketing and I have an app. At the same time, I still sport a fairly large vinyl and VHS collection and I non-ironically wear golf pants to brunch."

How does Hudkins bridge the gap between the two zens? “I have a program on my desktop that makes a typewriter sound when I type."

About Ronald E. Hudkins
Ronald E. Hudkins (1951-Present) was born in Canton, Ohio moreover was raised in Massillon, Ohio. He entered into the armed forces in 1970 wherein he remained up until 1993 when he retired honorably from the U .S. Army, Military Police Corps. Throughout his diversity of jobs, in between and after, he went to a lot of universities such as Kent State University, Maryland University, Central Texas College ( European Branch ), Blair Junior College, Hagerstown Junior College and Phoenix University . He actually managed between travels and work to complete general studies but acknowledged despite pursuing 2 majors in the areas of Business Administration along with a Bachelor of Science in Information Technology he did not complete the requirements to be awarded Bachelor Degrees in these areas of concentration. He admits he was never on a Deans Listing, or chosen as a most likely to succeed potential candidate but; if you were to grant credits for all of his awards, experience and self learning he could possibly realistically be considered a Rogue Scholar. His Book publication date was Dec 21, 2012, has 180 pages, color black and white, trim size 6”X9” written in English and the price of the book is $7.95. It is also available in Kindle format on Amazon at http://www.amazon.com/dp/B00ATQQB6W

For more information, Ronald E Hudkins can be reached at ron29950@yahoo.com or through (970)799-2974
169 Countrymens Way, Durango, CO 81303
Android App Name @ GooglePlay: Ronald Hudkins
Software by: All Kinds of Apps. (Listed in books and reference category).
Book name: Senior Things I Said, Say, Did and Do Volume One.
Website: http://www.ronaldhudkins.com 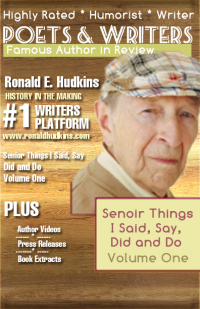