Allied Market Research recently published a report titled," Sensor Market Report." It predicts that the global market is estimated to generate around $241 billion by 2022, growing at a CAGR of 11.3% during the forecast period 2016-2022. The Asia-Pacific region dominated the global market and contributed around 45% of the overall market, owing to enhanced electronics industry infrastructure and growth in demand for electronic products such as handheld devices, PCs, smartphones, and laptops.

Early buyers will receive 20% customization on this report.

Sensor is a device that monitors any specific physical quantity such as heat, light, motion, moisture, pressure, or similar entities, by transforming them into any other form which is mostly, electrical pulses. On the global scale, the demand for sensors is projected to grow during the study period owing to the growing trend of the internet of things (IoT), progress in consumer electronic products, technological advancement in sensors and its growing adoption in smartphones, and high demand in the automation industry. In addition, the expanding automotive sector and surge in demand for wearable devices create several new opportunities in the market. However, integrating the sensors in devices incurs extra value and reduces life of a device, that acts as a restraining factor for the market growth. Sensors can be classified on the basis of type and technology used to manufacture them.

In 2015, radar sensor dominated the market in by contributing more than 15% of overall sensor market by the type of sensor. This is largely due to the growth in IT & telecom industry and increase in the usage of remote sensing devices in civil engineering, defense & aerospace applications and forestry & agriculture worldwide. However, image sensor is predicted to witness the highest growth rate in the market, owing to its high adoption of biometrics, camcorders, digital cameras, video-conferencing applications, virtual keyboards, and optical mice.

Based on technology, in 2015, microelectromechanical systems (MEMS) generated the maximum market share and claimed more than 45% market share as they deliver real-world, motion-aware applications that improves the consumers experience of electronic devices. Moreover, MEMS find its utilization in the automotive and industrial applications, and have quickly become an important component in smartphones, gaming controllers, and tablets. However, owing to the technological superiority over others, nanoelectromechanical systems (NEMS) are forecasted to have the highest growth in the market.

Get PDF of this Report @ https://www.alliedmarketresearch.com/request-sample/257

In 2015, the electronics industry contributed more than 60% of the overall sensor market. The key manufacturers of consumer electronic appliances are integrating additional sensors to their devices in order to gain a strong competitive advantage in the market. However, healthcare is estimated to be the fastest growing at a CAGR of 12.6% throughout the forecast period, due to advances in sensors that can increase the intelligence of medical equipment, such as life-supporting implants, and can allow remote monitoring of vital signs & other health factors.

In 2015, Asia-Pacific dominated the market, accounting over 45% of the total market revenue and it is predicted that is will continue its dominance throughout the study period. This is largely due to the presence of multiple current R&D activities, manufacturing facilities, high consumption, and production of electronic products where the sensor is utilized steadily. Further, North America and Europe are the second and third leading regions in sensor market projected to have a slow market growth.

The major market players in the sensor market focus on expanding their business operations in the developing countries with new product launches owing to the various R&D facilities. Sensor manufacturing organizations are designing efficient sensors for the electronic product manufacturers for healthcare equipment, electric vehicles, household storage, and portable electronics to launch technologically advanced products to increase their market share. 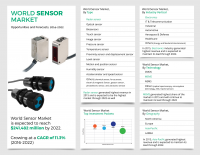