Preston’s bold new novel takes the familiar premise of FBI agents working to solve a case in 1996 and twists it into a dark cover-up that is deeper than even the hardiest conspiracy theorists could realize. Spawned by many years of diligent research into history, science and social awareness, ‘Sequence 77’ will leave readers questioning all they have come to know as true.

Fond du Lac, WI -- (SBWIRE) -- 09/25/2013 -- While most fictional works develop in the minds of their author, ‘Sequence 77’ came to be through extensive research into society’s shared consciousness. While the narrative haunted author Darin M. Preston for over two decades, he has finally committed his thoughts to paper and is sharing them with the world.

It’s a unique fusion of fact and fiction that dives deep into the minds and motivations of its seemingly-normal characters.

The past, present, and future collide in the hot summer of July 1996 as one man's desire to prevent repetition of history's mistakes pushes him to the very edge of reason. With the knowledge in his possession, he finally has the power to fulfill his vision and 'save' the human race.

Or would it better serve humanity to bury that secret forever; to prevent that man from applying his knowledge—and his judgment—and changing the world as we know it?

Sequence 77 dares to take a hard look at the illusions that are part of our reality, and shatters them to bring the truth into focus. The ideas expressed in Sequence 77 deserve to be heard, and they demand a reaction today.

As the author explains, he held off on releasing his work to ensure that he could conduct as much research as possible into the behaviors and events that allow his book to stand alone in the marketplace.

“This isn’t just any old work of fiction. It’s extremely thorough and has been in the making for two decades. The story haunted me since the 1990s before I decided to formally write it. However, the issues explored have little relevance to my own life; it almost felt like someone else’s idea possessed me and I had to exorcise it from within,” says Preston.

Continuing, “The ending to the story is where I started, all of those years ago. It took me twenty years to decide how to get there. It’s very true-to-life and I hope the story can be used as a spring board for discussions in classes which deal with scientific/medical ethics, race relations and sociology.”

“It’s been awhile since I've had a book where I've had to read "just one more" chapter in anticipation to see who the mysterious figure lurking in the shadows is. With such descriptive wording throughout you feel as if your embarking on the mind boggling journey alongside the main characters. If you like suspense, if you like action, and if you like just a touch of humor in all the right places, then Sequence 77 is a MUST read!” says one reader, reviewing the book on Amazon.

Ryan Deiss, who posted a comment on the book’s online forum, feels the book deserves the literary world’s undivided attention. He comments, “I recently had the pleasure of stumbling upon your book and reading it. I have to say WOW! The story, the characters the descriptions....simply one of the best novels I've read in years! This should be on Oprah, billboards and all over the internet. Sequence 77 is incredible!”

About Darin Preston
Darin Preston currently is a school psychologist in the Fond du Lac, Wisconsin school district. Although Fond du Lac is a predominantly white community, the population of minority families is growing rapidly. The transition has not always been smooth as students, teachers, and community learn to adjust to the influx of new ideas and unfamiliar cultural expectations. Darin's work responsibilities for the school district have changed significantly from providing solely special education evaluations to his now becoming a more eclectic mix of advisor, counselor, and program supporter. As his school district moves to keep pace with the changing times and demographics, Darin sees his position as one to provide support to all within the system who are ready to move forward and embrace the future.

Outside of his role as school psychologist, Darin has been consumed with the telling of Sequence 77 for some time. At times, relationships have fallen by the wayside in favor of making progress on the book. Darin is hopeful that the sharing of his obsession will prove cathartic, and allow him the time and energy to be free to explore personal life a bit more. 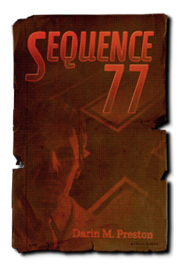