"It feels like a big hug when I walk in here," says Young. "Like [Snoop's] always watching me."

Sons of NWA's "Straight Outta Compton" EDM Remix was recorded for release as a single and is planned to be featured in "Westside Gangsta House," the upcoming album planned for release later this year by Serious Pimp Records.

"I respect the fact that Damian respected the lineage of my father and Curtis' father when he came to us with this," Wright says (Lil Eazy E). "It's about keeping people aware of where the legacy of this music started and, as his son, to keep his music going with this NEW Genre of Music called Gangster House (G HOUSE)."

"Serious Pimp Records is the cutting edge of the G House movement. Our roots are the Original OG's of Gangster Music, the great artists who started Gangster Rap like NWA, Snoop Dogg, Tha Dogg Pound, DPG, Warren G, Too Short, E40 - all of them from our backyard here in California," said Kutzner. "Our music is unique because it has the style and feel of the Original West Coast Gangster artists channeled through the creativity of today's top hip-hop artists." 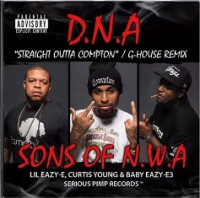