Styling her novels as indie fantasy for people who don’t do what they’re told, author Tracy Falbe began a 7-stop book blast tour on May 5th to promote the novel Union of Renegades.

Battle Creek, MI -- (SBWIRE) -- 05/06/2014 -- There are no giveaway drawings on fantasy author Tracy Falbe’s current blog tour because everyone can get free ebooks. The Union of Renegades Book Blast runs from May 5th to May 9th and visits 7 blogs. Every blog will connect readers to the free fantasy ebook Union of Renegades: The Rys Chronicles Book I at the retailer of their choice. Then the tour will finish with an extra bonus and all people who ask for it will be given the next book The Goddess Queen: The Rys Chronicles Book II for free.

Fans of Falbe’s fantasy books have compared her to George R.R. Martin because of the epic scope of her series and the diverse characters. Union of Renegades is well known for hooking readers who then snap up the other books in The Rys Chronicles.

TC Southwell
Vanessa Finaughty Fantasy Books
MathewReuther.com
Find Stuff 2 Read
To Write My Story Would Be An Awfully Big Adventure
Worlds of Magic and Adventure
Disciple of the Fount

The blog hosts will present Falbe’s invitation to receive a free ebook copy of the next book in the fantasy series The Goddess Queen: The Rys Chronicles Book II. The second novel is normally $4.99 and will be given away via a coupon code at Smashwords, an international retailer of ebooks in many formats.

This promotion marks the first time Falbe has given away The Goddess Queen, but the door is open only during the Union of Renegades Book Blast. On May 10th the coupon will be emailed to everyone who asked for one and the giveaway will end.

“My giveaway of both Union of Renegades and The Goddess Queen provides readers with about 330,000 words of free content. That should be enough to satisfy the longings of any lover of big fat fantasy books,” Falbe said.

The Rys Chronicles series offers readers a Medieval-style fantasy set in a world dominated by the Atrophane Empire in the east and the magical race of the rys in the west. The two realms have been ignorant of each other for thousands of years until the Atrophane horde breaches the haunted Wilderness that separates them.

As part of the tour Falbe will reveal in a guest post what she was thinking when she created the four main characters in Union of Renegades.

“I had specific thoughts and emotions behind Dreibrand, Miranda, Shan, and Onja. I hope that my insights into their creation will let readers know the depth of feeling that inspired this epic,” Falbe said.

The Rys Chronicles is a 4-part fantasy series that continues after The Goddess Queen in Judgment Rising and The Borderlands of Power.

Fantasy fans can follow the Union of Renegades Book Blast from Falbe’s blog Her Ladyship’s Quest. 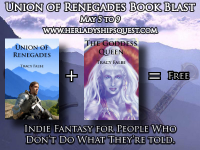