Portraying life’s steps as different ‘shades’, Bill Gray’s compelling book of poetic verse has captivated the hearts and minds of thousands. So much so that the book is being showcased at September’s coveted Toronto Book Festival.

Overland Park, KS -- (SBWIRE) -- 08/29/2012 -- Having endured life’s difficult journey from depression to rediscovery, Bill Gray credits his recovery to the notes he made along the way. When his eldest Daughter discovered her Father’s moving stories and poetry, she urged him to put them into a journal for her and her sister as his legacy to them. Later as the journal found its way into the hands of friends and acquaintances it became clear his words might also help others.

The result is a book so compelling that it’s to be featured at the upcoming Toronto Book Fair.

Many describe ‘Shades of Gray – Into the Light’ as an uplifting journey towards hope. Moving the reader through various stages of life, described as ‘shades’, poems and stories document the author’s dark abyss beginnings, and his struggle to come out the other side.

“Chronicled in no particular order, except at the beginning when times were the darkest, the book showcases the real importance of life and the irrepressible rewards that lie in wait for all of us who seek them,” explains Gray, who first released his private works in 2009 (his title precedes that of the famous E.L. James novel), after his eldest Daughter discovered them in a box.

He continues, “Everything is broken into segments from ‘Dark Shades’ and a short ‘Addendum to War’, followed by the "Medium Shades" of life and the eventual saving grace of humor in "Light Shades" and the new hopes they bring for a brighter tomorrow. Poems and short stories from life are recalled from facts as well as an occasional drift towards fiction, as I maneuvered the currents while managing to stay afloat”.

Critics are praising the book for its uplifting quotes and stories that demonstrate the interconnectivity of life, especially from the viewpoint of those who are willing to move on from the past.

As Gray explains, his recovery from depression plays a huge part in the book’s emotional progression.

“As my world moved from a place of despair to the realization that “life is for the living”, I found a new peace in the knowledge that I could go on!” Depression is a life-changing event that can be overcome. I know! I did it! My book is an adventure of the next heartbeat or breath as we choose to relish or betray its existence. As Alexander Pope quoted, “Hope Springs Eternal”. Thankfully Hope remains persistent as opportunities always lay in wait.. Being aware is the key, if we are willing to grab hold and hang on to those momentous occasions and the joyrides that still await all of us until the ends of our life,” he adds.

Now in its second edition, Shades of Gray has been so successful that its publisher will be showcasing Gray’s works at the upcoming Toronto Book Fair. Taking place this September, the international gathering of some of the world’s most coveted authors and critics is something Gray is delighted to be a part of.

“I originally wrote down my thoughts and feelings purely as a self-motivating mechanism. My Daughters urged me to publish my notes and, now that it is being featured on the world stage, I’m ever so thankful that they supported my publishing decision. I hope that the book can help people recognize that happiness is the light at the end of everyone’s tunnel,” he concludes.

Shades of Gray – Into the Light, published by AuthorHouse, is available now from Amazon.com in paperback and Kindle formats.

About Bill Gray
Seventy One year-old Bill Gray is a Kansas native with a passion for writing. Having endured life’s tough journey, Gray is now focused on sharing his experiences with others in the hope that their lives might also be improved. Gray has two Daughters. 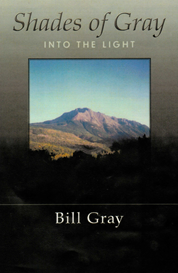