Albuquerque, NM -- (SBWIRE) -- 09/24/2012 -- It’s been described as a cross between Planet of the Apes, The Hunger Games and Indiana Jones. However, for author Daniel D. Shields, his latest novel breaks new ground in a world vastly unlike our own.

‘Shark & The Wolf: Predators and Prey’, answers many of the questions humankind have about animals. What would they tell us if they could speak? Would they question how they are treated? Would they debate human morals? And what would they say about how Human’s treat the planet?

Answers are in abundance, as the book’s compelling synopsis proves:

“Pack your bags for the wild side and hang on tight! Stamp your passport for adventure and enter an exotic world where animals have evolved side by side with humans. Prepare to be transported into an Indiana Jones style adventure and taken on a globe-trotting trek from the vast open plains of Africa, to the breathtaking beaches of Key West and Fiji, to the mysterious jungles of South America, before finally landing inside the gates of Sin City itself - Las Vegas, Nevada. Suspend belief and lose yourself in this roller coaster of a sci-fi thriller that has been called a cross between Planet of the Apes, The Hunger Games and Indiana Jones.

In Las Vegas, Shaw, billionaire casino magnate and self proclaimed world's greatest showman, nears completion on the massive Serengeti Resort & Casino. Its amphitheater is being transformed into an authentic slice of African savanna for the show Predators and Prey which will savagely pit animal against animal in the bloodiest gladiatorial spectacle ever created for human entertainment. The only thing missing is the main attraction - which Shaw soon finds in Shark, the world's only Great White pool-playing shark to be exact.

Shaw envisions the show's tagline as "Come One - Come All To See - The Only Great White Shark In Captivity" but soon learns that capturing the world's top predator and delivering him to Vegas is easier said than done. This daunting task will require the cruel tactics of the evil animal slave trading hyena, Old Jack. The heartbreaking plans they devise and innocent pawns they use to try to coerce Shark's allegiance will force all to rely on primitive instincts to survive.”

The author explains that, while primarily fantasy, his novel sheds light on many real-world issues.

“It is an allegorical novel about the exploitation of animals for the mere purpose of human sustenance and entertainment; an alternate reality where sentient creatures evolved intellectually and physically side by side with humans,” says Shields.

He continues, “The novel addresses contemporary themes such as slavery, human and animal trafficking, love, friendship, greed, revenge and of course romance.”

Since its launch, the book has been received into the literary world with critical acclaim.

“Daniel Shields has created a masterful thriller, which is not just a great vehicle for reminding us all that we are the worst predatory species on planet Earth, but also the species that threatens the existence of all others. But don’t think for a second that there is any preaching here, there isn’t. This is just a great adventure in which the human cast comes off second best to most of this book’s sentient animals,” says Richard Bunning of Bookpleasures.com.

Perfectly suited for anyone who loves to get lost in the amazing world of adventure books, Shark & the Wolf is a joyride through the greatest places on Earth, with danger around every corner and glory just over the next mountain. Readers will love the imagination of Shields, whose love for animals and travel inspired this one-of-a-kind tale.

About Daniel D. Shields
Daniel D. Shields was born and raised in Ridgefield Park, New Jersey. Now residing in the beautiful American Southwest, he enjoys travel, adventure, and spending time with his Yorkshire terrier, Charlie. Shields is the co-founder of LiquidWick Pool Cues, famous for it’s revolutionary LiquidWick True Stick, and uses his passion for billiards as an imaginative backdrop for his fantastical adventure story, Shark & The Wolf.

For media inquiries or to request a review copy, please contact: 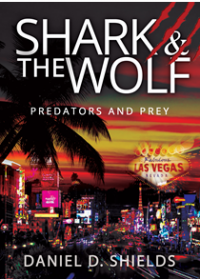