Boca Raton, FL -- (SBWIRE) -- 01/02/2014 -- The Institute for Policy Studies celebrated its 50th anniversary by highlighting bold, progressive social movements over the last five decades. The event was an open dialogue for activists to envision "The Next 50 Years" of movements.

Belafonte, who, along with Malala Yousafzai from Pakistan, had just received an Ambassador of Conscience Award from Amnesty International, participated on a panel about how to build on the lessons of the past to continue to create new movements for peace, justice, and the environment.

Other panel discussions included conversations about Turkey, Brazil, Egypt, Greece, and the Occupy U.S. movement, as well as questions about why people rise up, how these rebellions signal a shift toward civil society as a superpower, and what these popular uprisings mean for the future of social movements.

Other topics included conversations among campaigners, strategists, and legal experts on how to rein in excessive corporate power and advance real democracy; a review of past social movements and the lessons learned from challenging power, privilege, and prejudice; how to build new movements that are inclusive toward a better world; and how to shift the paradigm of U.S. foreign policy from fighting terrorism to achieving meaningful security and building peace.

The celebration, held at the historic Union Station, was attended by notable progressives from major social movements of the past 50 years and rising young activists and public scholars of today.

About Shawn Rae
As a unique and multifaceted personality, and a true nexus of the East and West, Shawn Rae is a natural-born global thinker who possesses a well rounded and interestingly refreshing personal appeal. 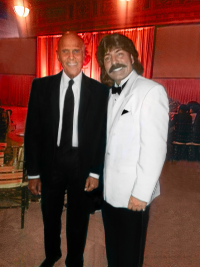