Having already captivated a growing audience with the first book in the ‘SheWolf’ series, J.D. Simpson is storming back onto the scene with volume two. Titled ‘Organ Snatcher’, the suspense-laden book is expected to resonate with younger readers around the world.

Franklin, NH -- (SBWIRE) -- 06/14/2013 -- While more and more young people are reading, teen fiction is often blamed for a lack of creativity. However, New Hampshire’s J.D. Simpson is bucking the trend with his compelling ‘SheWolf’ fantasy series.

Having already garnered a dedicated audience with the series’ first volume, ‘Drive-By’, Simpson is taking his narrative to the next level with the recent launch of volume two. Titled, ‘Organ Snatcher’, young readers are in for many exciting new twists and turns.

Synopsis of each volume:

Drive-By: Greg is on a mission to find out who killed his partner. Greg's new partner Sloan is hiding something from him. Now they must solve a case together that involves an evil corporation and three mysterious murders. Will they be able to solve it in time?

Organ Snatcher: After Detective Sloan blackmailed the Syndicate's for her freedom and promising Detective Greg to find his partner killer. But first they must solve a murder of a young woman in an alley with her organ's remove. Will they find the killer or end up as victims of a cured psychopath?

As the author explains, his books stand as unique within the marketplace.

“Throughout the entire writing process, my aim was to give readers something new; a literary experience unlike anything they have ever read before. This involved a lot of diligent character development and constant tweaking of the narrative,” says Simpson.

Continuing, “The end result is a very in-your-face book that engages with the inquisitive and evolving minds of its young audience. There are too many vampires and zombies in literature these days, so I am hoping SheWolf will be a refreshing addition to the market.”

Since its release, the series has garnered a consistent string of rave reviews.

“Ok we all know that werewolves and vampires have to be in the same book but I couldn't find any in this publication. The heck?! Where are the vampires?! For a werewolf book it is pretty amazon however,” says Pockit, providing a humorous review on Amazon.

Mark Churchill was equally as impressed, adding, “It is better than Twilight and Harry Potter!”

With his second book on the market and many creative new ideas in his author’s arsenal, Simpson promises many more adventures into the future. With demand for ‘Organ Snatcher’ expected to be high, interested readers are urged to purchase their copies as soon as possible.

About the Author: The author lives in Franklin, NH. 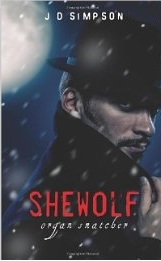