Simenona Martinez to speak at For Grace Conference and Release PSA's

Beverly Hills, CA -- (SBWIRE) -- 08/15/2013 -- Actress/Director/Singer Simenona Martinez will be a featured panelist at For Grace’s 6th Annual Women in Pain Conference “For Women In Pain, By Women In Pain” in Los Angeles on September 13, 2013. Tickets are on sale now. She will be speaking about how Lupus and Fibromyalgia have affected her life, but not her thriving career. She will also speak on her recent projects, such as Alex Cross, her Disney Channel’s Behind the Ears series, her albums Awakening and Can’t Stop and her upcoming memoir The Praying Tree.

The multi-talented actress will also speak about her role as director/ producer. Sioni Entertainment, Simenona’s production company, is preparing to release three new public service announcements on Wednesday August 28. The PSA’s are to increase awareness for lupus and newborn baby screening, and they will be featured on several media outlets. They will benefit SaveBabies.org, (President Jill Levy-Fisch), as well as a variety of Lupus organizations. Anyone interested in running the PSA’s should contact Stacy Harris (contact info listed below).

Simenona wrote, directed and produced the spots, which were filmed in La Habra, California on July 15. Assistant Director Michael Martinez (NBC Universal), Production Director Anna Beyazyan (formerly of Bunim/Murray), and Oscar V. Rivas rounded out the production team. Two of the PSA’s are to raise awareness for lupus, with the intent to spread knowledge about the disease, which is often overlooked and misunderstood. The goal of the Save Babies spot is to encourage young parents and families to understand the importance of early screening in preventative health care for infants.

Simenona Martinez continues to actively bring awareness to causes that often fly under the radar, and with the partnerships she has forged through Sioni Entertainment, she hopes to continue breaking new ground in the coming months. The Women in Pain conference promises to be an exciting event, as Simenona continues to be an activist for change and a shining star. She has proven herself as multi-talented entertainer with career longevity, substance and endless intrigue.

We collaborate with large corporations such as Bank of America, Lupus Causes, and SaveBabies.org.

Sioni has also worked one on one with San Francisco’s Warner Bros. WB20 Youth Division in 2003, writing, and producing a series of Public Service Announcements. Our writing team at Warner Brothers was nominated for an Emmy Award. Our films have also been featured in film festivals throughout the country and have been nominated for numerous awards. 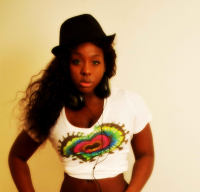