From working with Madonna’s Jesus Luz to stealing the Sunset Stage in Lisbon; Zoey Jones continues to soar to new heights with the release of her debut single, “Don’t Think”.

Lancashire, UK -- (SBWIRE) -- 07/06/2012 -- According to both Simon Cowell and many of Hollywood’s Elite – Zoey Jones is taking the limelight by storm. As an acclaimed singer, songwriter, dancer and producer, her fierce flair for elegance is about to raise the bar one more time as she announces the launch of her debut single.

Following an extensive period of production, Don’t Think is available from today. Boasting pop/dance tones with a funky edge vibe – it’s an uplifting hit that’s poised to become top of the pops this summer season.

The single marks the first major release for the 28-year-old British star, who is currently touring Asia while simultaneously preparing to launch her new album called “Don’t Think” on 6th Augustth.

With her debut television performance, Zoey (aka Callandria) made it to the finals finalist in Simon Cowell’s Pop Idol.

Zoeys’ musical style is steeped with rich elegance and melodic class. In fact, Zoey is quite often described as “Deliciously desirable, with an image sexier than Jessica Rabbit herself.”

Having first stepped on the stage aged just two; Jones won a prestigious scholarship to the Doreen Bird College of performing arts. Having excelled in all areas she was quickly invited to tour the UK, supporting major named English artists and eventually the world with Portuguese star, Fernando Periera. The work of her debut solo album quickly followed, earning an invite to perform on Lisbon’s world-famous Rock In Rios Sunset Stage, where Zoey shared the night’s bill with Elton John and Leona Lewis.

With recent engagements taking Jones all over the world, the star has still found time to work with Madonna’s DJ and Producer friend, Brazilian model Jesus Luz, as well as forging friendships with Hollywood A-Listers including Rob Schnieder and Adam Sandler.

With a myriad of elite successes and a hectic global schedule, Jones has had plenty of time to reflect on all that her first twenty eight years has afforded.

“In all, it has been a real blast. Although performing may look like an effortless task –hours of rehearsals go into each tour and I work solidly to ensure that everything is alright on the night,” she explains.

Continuing, “It has been a long journey so far and this is only the beginning. I want people to know that if they work hard enough and with enough passion, they can succeed in whatever they put their mind to. Believe in your dreams -- you can make them happen.”

Zoey is also active on social media. Her progress can be followed on YouTube, Facebook and MySpace.

About Zoey Jones
Having been on stage for as long as she can remember, Jones saw her first major success after winning a coveted scholarship to study dance and drama at the Doreen Bird College of performing arts.

Following a stint on the UK’s first Pop Idol television talent competition, Zoey was left with an eager thirst for learning more about the music industry. With her potential now in the forefront of the minds of many top European producers, Jones embarked on her first UK tour.

Fast-forward two years and her career had gone from strength to strength. Now living in Portugal, Jones was asked to record a duet with Portuguese star Fernando Periera and join him on his world tour.

With thousands turning out to see her, Jones returned to Portugal to begin her dominant career as a solo artist. Calling on memories from her travels and past loves, Zoey recorded her first solo album and was invited to perform her work on Lisbon’s world-famous ROCK IN RIO Sunset Stage (which also headlined the likes of Joss Stone, Omar, Incognito, Julie Mcnight,) on the same night as Elton John and Leona Lewis. Rock and Rio dates back to the 80s, where it originated in Rio, Brazil.

All the top artists inc Queen, Rolling Stones, Amy Winehouse, George Benson Rod Stewart, Lenni Kravitz and many more have all performed at this festival!

Zoey is currently touring SE Asia where she recently held a performance for the royal family of Cambodia. 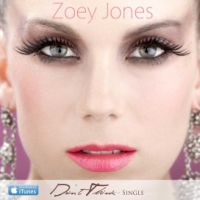