Back in February 2013, Soren Bryce won the first award of her young career at the prestigious Artists In Music Awards at Key Club in Hollywood. On February 7, Soren returned to the main stage to perform, but she didn’t come home empty handed as Soren came away as a 2014 two-time award winner for Best Folk/Acoustic Artist and for Best Singer/Songwriter at the 3rd Annual Artists In Music Awards.

Soren Bryce is a 17-year-old self taught guitarist, advanced violinist, a talented vocalist, songwriter, and actress. Native of Amarillo, TX, now residing in Los Angeles, Soren is continuing her pursuit in acting and in music. Soren wrote her first song on the piano at the young age of 7. Soren began acting professionally at the age of 13, written 2 screenplays, and has been featured in several commercials and films, including Southern Comfort, Never Alone, and the upcoming 2014 feature length film, American Girl.

Soren's music career started with open mics in LA at age 15 and at the age of 16, she won the award for Best Folk/Acoustic Artist at the 2nd Annual Artists In Music Awards in February 2013 at Key Club in Hollywood. Her song "Built My House Up" was also featured as the No. 1 Most Request Song of the Week for 17 straight weeks on KGUP 106.5FM in Los Angeles, CA.

Soren hosts her own weekly web show for Fanlala.com and can currently be seen on Disney's "Explored". Soren is also booked to appear on a pilot that will air on FOX in Fall 2014. Soren is not only a prolific songwriter but has written 2 screenplays and composed music for both of those. Both are in pre-production at present. 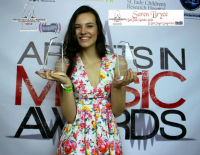