Masterfully crafted by Romelle Winters, ‘Some Fine Woman’ takes readers on a rip-roaring and thought-provoking journey as two widowed sixty-somethings rediscover the meaning of love and intimacy. Be prepared for disapproving relatives, boomerang children, a large dog and a feisty parrot; in a hilarious yet emotive novel that examines how aging individuals often face the same dilemmas they thought they’d left behind in their youth.

Fremont, NH -- (SBWIRE) -- 10/14/2014 -- Gone are the days when hitting the big six-oh meant resigning one’s self to slippers and daytime television. With modern-day culture placing a huge focus on revitalized senior youth, millions are quickly learning that this new lease of life also reawakens struggles and dilemmas that were traditionally assigned to ‘growing up’.

‘Some Fine Woman’ is author Romelle Winters’ bold attempt at examining them, told through a witty and highly-emotive story of two widowed ‘lovers’ who quite literally feel eighteen again.

Even more amazing is Winters’ ability to break down personal adversity and become one of the few blind published authors on the market.

He is a modern gentleman. She is Some Fine Woman and is rather an old-fashioned one at that, not at all “that kind of girl.” Jim Bennett tries to change Dolly Flynn’s mind and update her values to fit with the progressive world he inhabits. But the warnings of the nuns who schooled her have lasted well into middle age for Dolly. In her early sixties, she deflects Jim’s attempts to update her conservative mindset.

The two meet accidentally in Concord, New Hampshire, just before Christmas. Dolly has fallen in the snow in front of a supermarket. Both are widowed. Jim, who considers himself the neighborhood senior stud, has singular designs about Dolly. He takes her out several times with the goal of bedding her, but each time something happens to prevent it. Dolly looks upon Jim as a gentleman, not realizing his intentions are not the most honorable.

Can the intensity of love and intimacy reach past youth and into the twilight years, and just how are middle-aged children supposed to react to their parents’ courtship?

Join Jim and Dolly as they discover that life and love in a new century are quite different from the memories they cherish and the past they respect.

“Aging people, especially these days, face both the struggles of growing older as well as the re-ignition of dilemmas that affected them four or five decades previously,” explains Winters, a retired teacher who approaches her disability with admirable brevity and humor. “I convey these struggles in the story; anyone over fifty will have a lot of fun as they see these traits develop in Dolly and Jim, and perhaps also in their own lives.”

Continuing, “For example, one of the struggles is the incorporation of new technology into Jim and Dolly’s lives. They were cautious and wary of embracing it at first, and folks will have to buy the book to discover just how well they adapt to this new way of living. Difficulties get complicated with age, so be prepared for a rip-roaring journey that serves as a microcosm for all of us trying to be young again!”

Reviews for the book have been extremely positive. One Amazon reviewer comments, “This story is an immediate favorite! It's a modern story with traditional values. I always tell my kids about solid morals and values, especially when it comes to dating. This book relays a love story that follows those same values. It's a prime example of how we want our children to learn about and study a person with all their character traits before making a lifetime decision. This book would make a superb Lifetime Movie!!!”

Diane Pompei adds, “Easy read, very entertaining and humorous. I found myself laughing all by myself!!!”
‘Some Fine Woman’, from Strategic Book Publishing, is available now: http://amzn.to/ZT7ucC
Publisher’s website: http://sbprabooks.com/RomelleWinters

About Romelle Winters
Romelle Winters is a retired teacher who lives in New Hampshire. Her poor eyesight has caused her to put barbecue sauce on salad and chocolate on leftover scalloped potatoes. “I do have one goal in life: I want to meet Barry Manilow.” 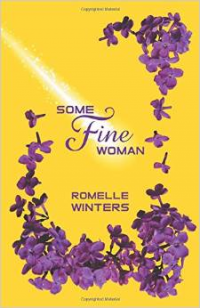