The first edition ‘Song of the Azalea: Memoir of a Chinese Son’ was published by Penguin; this title has selected on a shortlist of the Third Annual George Ryga Award.

Richmond, BC -- (SBWIRE) -- 07/08/2013 -- While these days see Kenneth Ore settled and enjoying life in British Columbia, his life has taken him on a fascinating and often unpredictable journey of activism, secrets and eventual disillusion. As a key figure in Hong Kong’s post-war Chinese Communist Party student movement, Ore’s efforts to recruit youth’s into the Communist student movement have left him with a unique view on life and a compelling story to tell.

‘Song of the Azalea: A Former Chinese Communist in British Hong Kong’ is that story; a biography that is captivating young and old readers everywhere.

In 1917, Ore’s mother was sold to a wealthy Chinese businessman by her opium-addicted father. Rather than becoming a concubine, she was educated as a doctor and assigned to the man’s son whom she married and bore three children. When the Japanese invaded Hong Kong in 1941, the mother’s courage and skill saved her family.

Kenneth as a young boy, having witnessed brutal Japanese occupation and corrupt Kuomintang rule, young Ore joined the covert Chinese Communist Party in Hong Kong. While sacrificing his one true love, ballet studies, and career advancement, he recruited impressionable youths into the Communist student movement. He guarded the secret from his parents and siblings until, disillusioned with the Party, he emigrated to Canada to begin the process of rebuilding his life.

When Kenneth’s mother became critically ill in Vancouver, Canada; Kenneth visited her without waiting for permission from the Party. Returning from Vancouver, Kenneth faced a series of intense “struggle” meetings that led to Kenneth’s disillusionment with the Communist Party. In a witch-hunt and the kangaroo court that followed, the Party’s final judgment was that Kenneth was an unworthy cadre, a collaborator of imperialism, and a traitor. Kenneth felt that he could no longer stay in Hong Kong.

As an immigrant, Kenneth saw North America as the true free world, the world the Communist promised.

As the author explains, his book stands as totally unique within the literary marketplace.

“It’s raw, candid and this story has never been told before. Many books have been written about China and about Communism. None, however, have revealed the clandestine student movement operation in Hong Kong,” says Ore, who is re-releasing his biography globally following its hugely-successful Canadian debut in 2005.

Continuing, “I also feel it’s a very important book with a story that the world needs to hear. This has been confirmed by the influx of heartfelt testimonials I have received.”

Indeed, reviews for the book have been overwhelmingly positive.

“It made me imagine the millions of untold biographies that were buried by the Chinese communist regime; the countless broken lives and shattered dreams. Your story is very beautiful, very tragic and really must be told to a wider audience." It’s the kind of book I will keep for decades because I want my children to read it,” said one reader.

Another was equally as impressed, adding, “I highly recommend this book because it gives insight into how minds can be duped in believing in a cause that has no regard for human life and does not promote understanding among people. The 'cause' uses propaganda and brainwashing of vulnerable people, who usually are young and idealistic to accomplish."

With its popularity expected to increase, interested readers are urged to purchase their copies as soon as possible.

‘Song of the Azalea: A Former Chinese Communist in British Hong Kong’, published by Amazon.com and Kindle edition by CreateSpace, is available now: at all world Amazon.com
http://amazon.com ; & http://amzn.to/19SEkxc

About Kenneth Ore
Kenneth Ore, for 25 years, was an underground Communist member in Hong Kong. He actively recruited and coordinated hundreds of youth activists in a non-profit student organization—Hok Yau Dancing Club, which in fact, was a Communist organization.

Kenneth Ore has an Economics Degree from the Chinese University of Hong Kong, was a high school economics teacher, a well-known ballet teacher and dancer, with membership in the Royal Academy of Dance and, later, manager in foreign companies; with decadent “western” hobbies like classical music, sailing, fencing and weight lifting. His college peer described him in the College yearbook of class 1956 as “Loves classical music and ballet, because they represent beauty and gracefulness. He is a man whom love and hate, beauty and wickedness, kindness and maliciousness are clearly distinguished.” 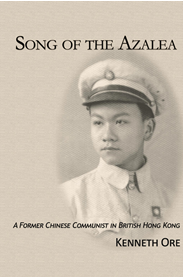