The collaboration song 'Blood in My Veins', is from 2 of the best music producers of the world; Chris Willis, who requires no introduction, as he is one of America's best singer, songwriter and record producer, who has topped the world charts several times and has won hearts of thousands and billions of people of the world; and on the other hand Mike and Ishi, or the Vinyljackers, a DJ duo from Maastricht – has also earned several honors and recognitions, and are also worldwide recognized as one of the best DJ duo.

The creative team of the Sound2kill4 Records has invested a lot of time and hard work in making this amazing manga video. While discussing the manga video of the Blood in My Veins, the spokesperson of Sound2kill4 Records stated, "Our team has put a lot of time and effort in making the manga style video of Chris Willis and Vinyljackers' song 'Blood in My Veins'. It was an honor for us to get a chance to work with Chris Willis and Vinyljackers, we hope that the viewers will love - both the song and the video – and will make 'Blood in my Veins' a mega super hit".

Though the video of 'Blood in My Veins' was recently released – on August 26, 2016, but within a very short time period this video has become viral and has already been viewed thousands of times – and the best thing is that this number is rapidly growing.

So, Sound2kill4 Records is expecting the numbers of views to grow to millions, as stated by the spokesperson of Sound2kill4 Records, "Though the concept of the Blood in my veins' video may be new for many people, but still this video is being well received by the people and the majority of the people seem to love the video of this song. The song is powerful; the video is just amazing – so it would not be wrong if we expect this song's views to be in millions. Hence, fingers crossed, let's see when do we reach a million views".

For watching the amazing manga video of Blood in My Veins, please go to https://youtu.be/abdJqS_oB6E and for further information about Sound2kill4 Records please go to www.sound2kill4.com. 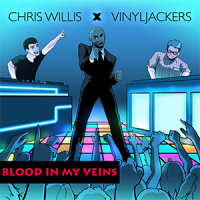