Miami, FL -- (SBWIRE) -- 06/24/2013 -- The Miami Heat and Lebron James did it again, making the 2013 NBA Championship The Miami Heat’s third National Championship and a back-to-back win. The Miami Heat celebrated their victory in a parade that started in Brickell and lead straight into the American Airlines Arena on Biscayne Blvd. South Beach Smoke, a long-time Miami Heat supporter and popular electronic cigarette brand in South Florida, made sure to make an appearance at the big parade.

Thirty South Beach Smoke representatives stood with an estimated half a million people at Miami Heat’s victory parade distributing over 20,000 flyers that read “NO HATE ZONE” on one side and “HEAT NATION Get 25% OFF THIS WEEK! http://www.SouthBeachSmoke.com/HEAT” on the other side. The Miami Heat won their first Championship in 2006, their second championship just a year ago in 2012 and did it again Thursday night, June 20, 2013.

Channel 10 caught live footage of one of the Miami Heat parade buses with a passenger displaying the South Beach Smoke “NO HATE ZONE” sign. There were thousands of people on the side of the road, watching as the parade went by, waving their “NO HATE ZONE” signs in the air as well. The South Beach Smoke signs were a hot item to have at Monday’s parade and the news really seemed to enjoy its coverage and popularity on the streets of Downtown Miami.

South Beach Smoke offers a smoking alternative with electronic cigarettes. E-cigs as they are commonly known, are a high-tech, non-flammable solution for obtaining nicotine without exposure to tobacco. They contain no smoke, no secondhand smoke, no tobacco and no tar. One of the best features, and most convenient feature for an avid basketball fan, is that since there is no smoke the e-Cig can virtually be smoked anywhere!

“You could really feel the heat down there,” said a representative from South Beach Smoke who was on the scene. “There’s so many people who love to hate on The Heat but today is about celebrating, and South Beach Smoke wanted to make sure there would be no hating going on downtown!” 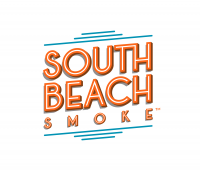 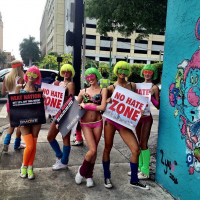