In Less Than a Year, Sovereign Council Garners International Fandom and Success

In metal band Sovereign Council's first year, they’ve already achieved an impressive amount, including releasing their debut album, New Reign, having their track "Down the Rabbit Hole" featured on WiFi PR Group's compilation Indie Anthems Vol. 4 and achieving international success after less than a year from the album’s release and only six months of live performances.

Las Vegas, NV -- (SBWIRE) -- 01/13/2014 -- From headlining performances right off the bat to almost immediate international fandom, Kingston, ON, metal band Sovereign Council have hit the ground running since they banded together in October 2012. In that first year, they’ve already achieved an impressive amount, including releasing their debut album, New Reign, and achieving international success after less than a year from the album’s release and only six months of live performances.

The group’s blend of vocals has earned them comparisons to Lacuna Coil, Evanescence, Delain and Nightwish as well as Kamelot. Like these bands, Sovereign Council embraces metal head on, with all of its throttling guitar riffs, intense bass lines, driving drums and fluctuating vocals that are at times guttural and at others more mellow and introspective. Their unique sound has been influenced by a wide array of artists, from Chopin and Mozart to Slipknot, Metallica, Slayer and Epica, and they find inspiration for their songwriting in lost loves (sometimes from music taking priority), betrayals, deaths and other hardships in life.

This sound has propelled Sovereign Council to near instant success among fans locally, nationally and internationally, especially in South America, and their online fan base grows exponentially with each passing month. They headlined and sold out all three of their very first shows and even joined up with metal band Santuarium out of Rio de Janeiro, Brazil, to perform as co-headliners for the Ontario leg of their North American tour.

Magazines in Canada, Europe and South America have all reviewed their debut album, giving it high marks and colorful praise. The group enjoys airtime on radio stations locally, throughout Canada and even across the globe. What’s most impressive is that all of these accomplishments have happened in their first year alone.

Their track “Down the Rabbit Hole” will be featured on Wi-Fi PR’s Indie Anthems Vol. 4, which will be released at the 2014 SXSW. The song encapsulates the powerful but refined metal sound that Sovereign Council strives for and will be strong exposure in the U.S. market via this huge indie festival.

In terms of their live shows, check out videos of “Dolos” and “Down the Rabbit Hole” live at the Ale House for a glimpse of what to expect.

You can stream their music, including their debut album New Reign, for free on their Reverbnation page. To purchase their music, you’ll find digital copies on iTunes, Amazon, Reverbnation, Emusic.com and Rhapsody and physical copies at several record stores in Kingston and one in both Ottawa and Perth. 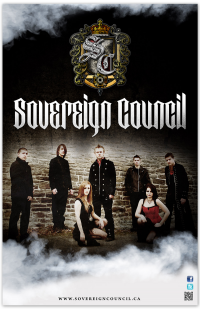