Space Heaters Strive to Represent Neo-Ska at Its Best with Latest Album, Helio

Las Vegas, NV -- (SBWIRE) -- 01/13/2014 -- Ska, indie and alt-rock converge to create the neo-ska feel of Space Heaters and their latest release, Helio (2013). The album demonstrates the growth of a band both together and as musicians while conveying strong viewpoints both musically and lyrically. Off this latest album, their track “Sources Say” will be featured on WiFi PR Group’s Indie Anthems Vol. 4.

The group is comprised of five La Crosse and Stoughton, Wisc. natives: identical twin brothers Troy Glasel (bass) and Tyler Glasel (lead singer and trombone), Conner Reisdorf (guitar), Austin Wersal (drums) and Max Nobiensky (guitar and trumpet). Each coming from different musical backgrounds, they banded together to form this band and pursue the creation and proliferation of neo-ska.

Their first EP, Morning Light, released in fall 2012, was five tracks of their earliest original music and served as a great introductory to their own breed of ska and alt-rock music. Songs like “Worthwhile” are also heavily influenced by indie rock and demonstrate the versatility of this group that’s been present since their early beginnings.

On their latest EP, Helio, released in spring of this year, Space Heaters take an even more thoughtful approach to their music and lyrics, for instance, expanding into more political themes, such as in “Sources Say.” The track’s lyrics and soaring chorus warn listeners about blindly trusting political leaders and the media and encourages a healthy suspicion when considering the credibility and authenticity of a source. With this latest album, you get a sense of their increased maturity as individuals, songwriters and a band—growth which will undoubtedly continue with their later recordings.

In addition to their original music, they also cover artists such as Kings of Leon, The Red Hot Chili Peppers, Incubus, Reel Big Fish, The Mighty Mighty Bosstones, Sublime and Dispatch, many of whom they consider to be musical influences. These influences are a combination of alt-rock bands and ska bands, all of which inform rather than construct the carefully crafted and unique sound that Space Heaters bring to the table.

In the past, they have opened for such national acts as Loftland and Shine Bright Baby at The Warehouse in their band’s hometown, La Crosse, a venue where artists like Motion City Soundtrack and Everclear have performed. They also performed with Hang ‘Em High, whose lead singer Travis Allen worked with the band on producing, mixing and mastering all of their songs and is originally from the punk rock band The F-Ups.

Space Heaters is on a temporary hiatus from shows while they record their third EP, which they may even extend to a full-length album, but you might be able to catch them at SXSW in March 2014, the same time WiFi PR Group’s Indie Anthems Vol. 4 will be released, which will feature their track, “Sources Say.”

For the band, “Sources Say” was one of those songs that magically and spontaneously came together, and it’s one that demonstrates their ability to complement each other and build on one another’s ideas in the moment. It’s a talent that contributes to the uniqueness of their sound which keeps it from being too closely compared to any other music that’s currently out there.

Space Heaters have physical copies available for fans and concertgoers for their Morning Light and Helio EPs, and they also sell both EPs on their bandcamp page. 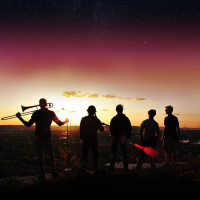