Specyal T is the stage name for Toronto-based solo artist Trish Hylton. Hylton is both a vocalist (singing and rapping) and a multi-instrumentalist with piano and trombone as her main instruments. She’s played the piano since the age of 2, and from ages 6 to 19, she developed her musical training at the Royal Conservatory of Music, as encouraged by her adoptive parents. Hylton has performed in 250+ shows as a solo instrumentalist, accompanist, ensemblist and vocalist throughout her musical career. Music is not only her livelihood—it is part of her DNA, solidifying the sentiments of her birth mother, who insisted Hylton has had music in her blood since the womb.

Later in her music career, Hylton became more taken with singing and hip hop vocals, and so came her vocal personality Specyal T. Her voice is distinctly smooth and breathy, and she’s often compared to two of her biggest musical influences, Missy Elliott and Lauryn Hill. She lists her other musical influences as TLC, Salt N Peppa, Boyz II Men, Timbaland, Musiq and Neptunes.

Her latest single, “Almost Lover,” depicts her high school experiences, which includes tackling matters of the heart on top of typical trials and tribulations, and uses true stories from her past as her muse. It is the first single off of her upcoming album, Dose of Distinction 2, and it will also be featured on WiFi PR’s Indie Anthems Vol. 4, to be released in March at SXSW 2014.

Dose of Distinction 2, set to release in early 2014, will be Specyal T’s crowning achievement in her long, illustrious music career. In this album, she pours out her heart and soul, dealing with subject matters from growing up Black in a predominantly Caucasian community to her journey to become a mother.

This album follows up her debut digital release as a vocalist, Dose of Distinction (2010), which did more than just make a name for Specyal T in Toronto’s hip hop scene. The first Dose of Distinction also garnered her international fame when the album reached No. 11 on the UK Hip-Hop/R&B charts just two days after its initial release—without any marketing or promotion. The music carried her to her early successes and continues to propel her forward with her latest efforts.

Specyal T’s time and talents have brought her special opportunities, such as a nomination by BlackCanadians.com as a role model and ambassador plus an exclusive interview with them. In the interview, she talked about her background and career while also supporting the Black community in Toronto and encouraging growth, particularly in the music industry. She was also recently nominated by BlackCanadians..com as a top nominee for Best Female Hip-Hop Artist.

Specyal T has released videos for four of her singles, including “Ice Cream Cone,” “Paralyzed,” “Get Me Thru” and “Airtight,” all of which first appeared on her debut album, Dose of Distinction. Each video adds color to the song and brings her lyrics to life with smart casting and memorable storylines. You can expect more videos to come along with singles from Dose of Distinction 2.

In addition to her own musical endeavors, Specyal T runs her own business and indie label, SPECYAL T PRODUCTIONS, which currently represents herself and up-and-coming pop singer Catherine Marie.

You can purchase Specyal T’s music on iTunes, HMV, Amazon, eMusic and CD Universe. Dose of Distinction 2 will be available for sale in early 2014. 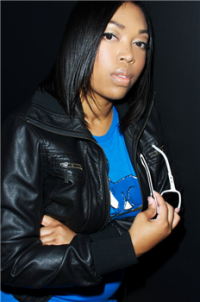