Presented as a series of compelling dialogues and essays, Professor Spira’s new book reveals the power of adopting a lifestyle that is free from foods that create excess mucus and pus. Having used the concept to radically change his own life, the charismatic author is now sharing his story and blueprint with the world.

Columbus, OH -- (SBWIRE) -- 01/18/2013 -- Aged 19, Professor Spira was 280lbs and suffering from a string of health problems including chronic migraines, frequent ear infections and acid reflux. However, after being acquainted with someone who had harnessed the power of Arnold Ehret's Mucusless Diet Healing System, Prof. Spira knew that it was his only hope.

After losing 110lbs, eradicating his health problems and discovering a positive new lease on life, Spira is releasing a new book of dialogues and essays; set to share the power of the diet with the world.

‘Spira Speaks: Dialogs and Essays on the Mucusless Diet Healing System’ imparts the information by connecting it to the author’s own inspiring story.

Join Prof. Spira for an unprecedented look into the healing power of a mucus-free lifestyle! After loosing 110 pounds and overcoming numerous physical ailments, Spira learned that he had a gift for articulating the principles of the diet through writing and music. As he began to interact with health seekers on the internet in 2005, he realized that the written dialogs about the diet could benefit far more than just its intended reader. This book is a compilation of the best writings by Prof. Spira on the subject.

What is the Mucusless Diet Healing System? How has it helped numerous people overcome illnesses thought to be permanent? What does it take to practice a mucus-free lifestyle in the 21st century? Why is the transition diet one of the most misunderstood aspects of the Mucusless Diet? Spira answers these questions and much more in his unprecedented new ebook which contains never-before released writings about the mucusless diet.

As the author explains, the diet and its original creator deserve much more recognition than they are getting.

Yet, too few people know of his works or the people who currently live a mucus-free lifestyle,” says Spira.

Continuing, “The world needs to be exposed to the power of the Mucusless Diet Healing System now more than ever.”

“The people just finding out about the Mucusless Diet Healing System NEED this – people like me… even after years on a raw transition we need to know it’s OK to transition any way that we can,” says Wendy Campbell, a noted Detoxification Specialist.

Kenny William was equally as impressed, saying “Thank you for the excellent work! As someone who has struggled with the yo-yo approach to mucus free foods, this was an eye-opening post. I appreciate it.”

As one of the foremost authorities on the Mucusless Diet and having helped thousands change their own lives by using the concept, Spira’s book is being praised by critics for its attempts to improve the health of the nation.

“People around the world, especially in the United States, are suffering from greater and greater health problems. However, there are many underutilized natural tools that can transform lives for the better. I firmly believe that the Mucusless Diet Healing System is one of them and my passion is to help the world become aware of it,” he adds.

Spira maintains an active and popular website where he regularly shares information and interacts with visitors.

To visit it and find out more about the book, head over to: http://www.profspira.us

Early in Spira’s college career he began to frequent the local jazz clubs and bars to “sit-in” and obtain bandstand experience. This is when he first met Brother Air who, at the time, was traveling to jazz venues and “sitting-in” with his legendary hand-drum rig. In the summer of 2002 Brother Air would have a conversation with Professor Spira and his good friend Daktehu that would forever change the course of their lives. The dialog took place at a jazz club named Chez Nora in Newport, Kentucky during the set brake. Spira and Daktehu were munching on the free Barbecue when Brother Air started to talk about Arnold Ehret’s Mucusless Diet Healing System. Spira was very impressed with Air’s claims of eating nothing but fruit for an entire year and ultimately was inspired to read the Mucusless Diet Healing System and Rational Fasting books. Spira, who at the time was a 280 pound ex-high school football player, was rather ill. He took numerous prescription medications, suffered from chronic allergies, chronic migraine headaches, frequent bouts of bronchitis, arthritis, and sleep-apnea for which he slept with a respirator at night.

One day, in September of 2002, Spira was in a college practice room with his trombone in hand looking into a mirror. He explains that a feeling of disgust came over him that he had not ever felt before, and for the first time he could not believe what he had done to himself. He then vowed to dedicate his life to physiological liberation, and he immediately started transitioning away from pus and mucus forming foods. By the spring of 2003 Spira had lost 110 pounds and went from a size 40 to a size 34 waist. He cured all of his illnesses and was able to quit taking his medications and using the respirator.

In November of 2003 Spira and Brother Air met with jazz great and Ehretist Charles Lloyd to discuss the Mucusless Diet. During this conversation Lloyd insisted that they send him some of their music. This pivotal meeting would inspire Brother Air’s first 8-½ month juice fast as well as the formation of the Breathairean Ensemble. After witnessing Brother Air’s fast in 2004, Spira explains that he was physiologically inspired to complete his first six month juice fast in July of 2005, and his second in July of 2006. Though he did not set out to achieve these lengthy fasts so early in his transition, he asserts that the opportunity presented itself and he would have been a fool not to take it. Spira believes that it was the logical conclusion of his submission to the Mucusless Diet Healing System that allowed him to pursue his physiological potential.

In 2005, Prof. Spira started to more actively promote the Mucusless Diet and help others learn to transition. Since then, he has become one of the foremost authorities on the Mucusless Diet Healing System and the works of Prof. Arnold Ehret (forefather of modern-day plant-based, vegan lifestyles).

In January 2013 Spira released his first Ebook entitled Spira Speaks: Dialogs and Essays on the Mucusless Diet Healing System. He is currently finishing a mucusless menu and recipe guide which is projected to be released in February 2013. 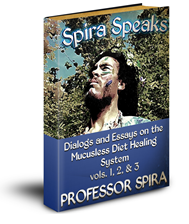