Atlanta, GA -- (SBWIRE) -- 03/01/2013 -- Through his renowned ministry, Marquis Boone has become the dedicated spiritual advisor to a growing list of Hollywood stars. Having changed the lives of dozens of celebrities, Marquis Boone is now breaking new ground in the world of literature with his new novel ‘’Til The last Drop’. Boone is achieving rapid and growing success. In fact, many are referring to ‘’Til The Last Drop’ as the ‘New Shack’.

Synopsis:
It is February of 2000, and Arthur and Valencia Todd and their twelve-year-old daughter, Lindsy, are living very happily-until Valencia receives a life-changing phone call. Life deals her a crisis that requires a miracle of biblical proportion.

Six months later, Valencia's life is still in shambles. As she walks on a path lined with grief, frustration, illness, and loneliness, Valencia is too frightened to seek help from doctors, on whom she quietly blames her mother's premature death. As she prays for answers, nothing seems to heal her persistent medical condition, prompting Valencia to plummet down a dark tunnel of despair.

'Til the Last Drop is the inspirational story of one woman's journey to the truth as she learns to listen to her heart, never give up, and, above all, trust in God.

As the author explains, his book is needed now more than ever. “This story is important because it’s not only entertaining but it speaks hope and life to so many that need it during these hard and testing times,” Says Boone. When asked how he felt about people calling it the new Shack he said, “I am honored to have people calling it the new Shack. This really makes it unique and I’m so proud to be associated with this accolade.”

Since its release, the book has garnered a consistent string of rave reviews. With the book’s popularity set to increase, interested readers are urged to purchase their copy as soon as possible.

‘’’Til The Last Drop’ is available now where books are sold: http://amzn.to/WfYevL

About Marquis Boone
Marquis Boone is a pastor, motivational speaker, author, entrepreneur, mentor and spiritual advisor to a host of celebrities. Marquis is the Lead Pastor of Fresh Start Church which exists to revive, refresh, release and restore people back to God. He has been deemed one of America's most influential and talented pastors in his generation. Boone holds a Master of Arts in Christian Leadership and Masters of Divinity from Luther Rice University. He studied at World Harvest Bible College and completed a Bachelor of Science in Business Administration with a minor in Management from American InterContinental University 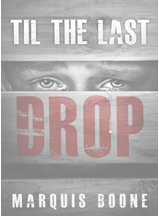