Seattle, WA -- (SBWIRE) -- 05/01/2012 -- World-renowned humanitarian and spiritual leader Mata Amritanandamayi Devi (Amma) will begin her 26th summer tour of North America on May 31 at the Hyatt Regency, Bellevue. Amma which means mother is famous for her unique practice of receiving all who come to her with a compassionate embrace. She has traveled the world for 26 years and literally hugged more than 30 million people. The CBS TV Primetime Special, "In God’s Name" profiled Amma as one the world’s twelve most influential religious leaders. Amma says she is trying to awaken the qualities of love and compassion, which she feels are essential for world peace and harmony.

Dr. Jane Goodall, eminent primatologist presented Amma with the 2002 Gandhi-King Award for Non-Violence at the United Nations. "She stands here in front of us, God's love in a human body" said Goodall

In 2004, Amma emerged as a global figure in disaster-relief, donating over $50 million in relief and ground zero support of victims of earthquakes in Peru and Haiti, floods in Northern India and the devastating South India tsunami. Her efforts made headlines on World News Tonight with Peter Jennings, BBC News and in The New York Times. In 2006, Amma gave $1 million to the Bush–Clinton Katrina Fund. This year Amma traveled to Japan to personally console survivors of the devastating tsunami, and donated $1million USD for the education of children who lost both their parents.

Embracing the World Amma’s disaster-relief network active in 30 countries, has developed a reputation for being first on the scene and the last to leave - long after the spotlight has faded away. The United Nations conferred "Special Consultative Status" on the India-based organization because of their dual focus on rapid response and extensive long-term rehabilitation.

Dr. Steven C. Rockefeller, PhD said, “When I think of Amma and her life of devotion and service, I see a shinning example for all of us of the spirit, reverence, compassion and care.”

Pacific Northwest Programs include; spiritual talks, devotional singing and the opportunity to receive Amma’s darshan —a spiritual blessing in the form of a physical motherly embrace. Free Programs are offered Thursday May 31 at 10:00 am and 7:30 pm and Sunday June 3 at 7:00 pm. Pre-registration is required for a Retreat with Amma on June 1 -3. More Info: http://seattlesatsang.amma.org/ 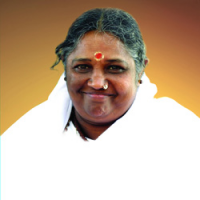