At a recently held press conference at SpyCrushers corporate office in Geneva, IL, Ryan Anderson, president of SpyCrushers announced to the group of attendees the launch of the company's newest hidden camera product the SpyCrushers Spy Camera AC Adapter on Amazon.

According to Anderson the AC Adapter spy camera is a normal looking AC/DC Adapter plug that has a covert hidden camera installed. The spy camera records 720p HD video and takes photos. The spy camera features a motion activation setting that when activated sets the spying device to record only when motion is sensed. Additionally, a night vision feature is also included that allows the spy camera to record viewable video in the dark up to twelve feet away. A remote controller is also included that allows the spy camera user to start and stop video recording, take photos, activate the motion sensor and turn the device off and on.

"Our new AC Adapter Spy Camera adds to a list of high performing spy gear. Unlike our wearable spy pen, spy camera sunglasses or smiley face pin spy camera, the AC adapter plug directly into any outlet and records continuously until stopped. The included 16GB micro sd card will store up to 5 hours of video on a single charge," Anderson continued.

Anderson stated that the purchasers of the spy camera receive a money back or new replacement guarantee if not completely satisfied.

The SpyCrushers AC Adapter Spy Camera can be found on Amazon when using the search word spycrushers inside and open search bar found on any Amazon webpage.

About SpyCrushers
SpyCrushers brand and line of products are owned and operated by Crushers Inc. Crushers, Inc. is a manufacturer and retailer of consumer goods and electronics. 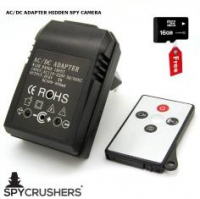